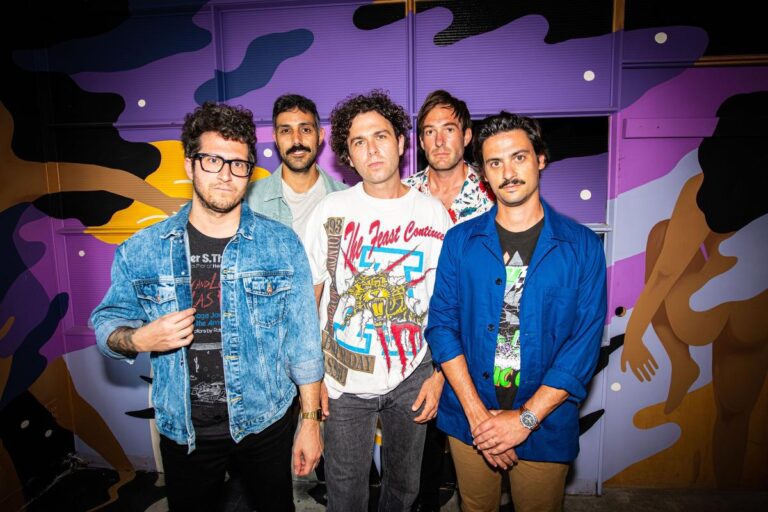 If there was a chart of Canada’s biggest indie rock bands in the last decade, Hamilton’s Arkells would be closer to the top. Since their debut in 2007 with the Deadlines EP, and the 2008 Jackson Square album, Arkells have been consistently riding the indie music radio charts. During the pandemic, they released an acoustic album of old songs and a brand new album in 2021 called Blink Once.

This September they are dropping part two, entitled Blink Twice. Lead singer Max Kerman assures us that both Blink albums are meant to be listened to as one piece of work, a double LP if you will. We spoke with Max ahead of Arkells’ performance at Osheaga about the upcoming album, keeping the Arkells’ sound fresh, and collaborating more in alternative rock music.

PAN M 360: Your Hamilton show in June looked like one of your biggest and it was postponed a few times right?

Max Kerman: Yeah it’s been a lot of stopping and starting. We did some shows last summer in Toronto, on the Budweiser stage to kind of kick off live music again. And then, you know, things got ground to a halt again in the winter. And then we did some American tours in the spring and some Ontario dates. And our big Hamilton show happened at the end of June, and we did some Canada Day stuff out in British Columbia, but Yeah, feels like we’re, we’re back on solid ground. You know, we’re obviously coming to Montreal at the end of the month for Osheaga and have some European Touring after that. So it feels good to be working again.

PAN M 360: And what’s it like to tour again with that level of uncertainty as the pandemic rises and plateaus?

Max Kerman: Yeah, it’s hard to think too hard about it. You might drive yourself crazy. On a certain level, you sort of have to trust the experts and listen to their good advice. And sort of hope for the best that you can, you know, do your job which is going out and entertaining people.

PAN M 360: You guys have the Blink Once album out and Blink Twice coming out in September. Where did this idea of co-albums come from?

Max Kerman: Hmmm good question. I mean, I think we intended to kind of roll out Blink Once back in 2020. And then the pandemic happened, we looked around, and we noticed, that so many of our favorite artists and friend’s bands were putting up the music and without touring, it felt like all their efforts into it. It sort of like evaporated right, because touring is such an important part of expressing music. So we put Blink Once on hold and we made an acoustic record. And we continued to write new songs. So when we put up Blink Once in 2021, we always knew in the back of our minds that there’d be more music coming. And it would also help kind of like, seed the album cycle, and make the music feel like it’s fresh and new and exciting. And we actually did sort of like a Taylor Swift-style tease where the last song on Blink Once is an outerlude and it’s actually a bit of the first song from Blink Twice.

PAN M 360: So is the idea to kind of play them front to back as a double album?

Max Kerman: That’s the goal. I think it’ll feel like one body of work. There’s a lot of music being put out these days. And I think we’re of the mind that if you’re excited about the songs you don’t have to wait two and a half years between record cycles and if you got something you’re pumped on you can put it out.

PAN M 360: And you have many guest artists on the upcoming Blink Twice album; The Cold War Kids, Tegan and Sara, Lights, Aly & AJ, and Cœur de pirate. Was it the pandemic that kind of gave you the time to work with so many?

Max Kerman: I think the pandemic allowed a lot of time to sort of reflecting and think about what we wanted to do moving forward and how we wanted to evolve and try new things. And I think when we look around at other genres, whether it’s hip hop or electronic music or pop music, there’s so much more collaboration. It feels like rock music doesn’t get to do that as much, right? So why can’t we do it? So we started reaching out to friends. And we had certain songs in mind that we thought could fit certain voices. And yeah, it was really fun. And I think for us, it’s like being able to like to make music, which is not just my voice singing on it. At least for us, it’s amazing to listen back to the music that we’ve made and, and hear another voice on it. Like I was tired of my voice. I was just singing everything.

PAN M 360: We obviously love Cœur de pirate here, what was it like working with her on “Dance With You”? And also, singing in French?

Max Kerman: Yeah, well, I’d say that my French accent is not great and I worked really hard on trying to make it passable. People in Quebec and France can tell me if I did it or not. And yeah that one was quite different from most of our other material. And I think it’s, to me, that’s why it’s really exciting. And we wanted some female vocals that sound good together for the course. And then having some sisters sing on it, Aly & AJ, did the trick. I listened to a lot of French music during the pandemic. It was kind of fun in the morning to listen to like old French folk music while I was reading the paper. And I was like, ‘Well, why don’t we try to do something where it’s, you know, one verse in French one verse in English. And we reached out to Béatrice [Cœur de pirate] with the idea. And she came up with some amazing lyrics in short order, and we got her to sing with us. And again, it’s all about a sort of personal discovery, evolving and not doing the same thing you did before.

PAN M 360: And you guys went like full Motown funk for that song. The first time I listened to it I wasn’t even sure it was Arkells.

Max Kerman: That was the goal! We wanted people to listen to it and go ‘Oh this is Arkells? This is crazy.’ That was truly what we were going for. And yeah, we wanted some kind of disco vibes, you know, something that kind of felt electronic and dancey as well. You know, we were referencing, Daft Punk or Justice, you know, in some of the production moves. But also, yeah, that sort of ’60s, ’70s Like, dance vibe as well.

PAN M 360: There’s one lyric I picked out where you sing about meeting someone in an airport I think? It’s “you were working in Japan.” Was that just random or an actual encounter you had?

Max Kerman: I would say that was a random thing. The idea was like meeting people out and about, especially, you know, from different places. I’ve never been to Paris. But I was like, you know, what, if you’re in Paris and met someone who’s traveling in Japan, there’s sort of a bit of a fantasy world.

PAN M 360: I guess that is something people are reaching toward during this pandemic.

Max Kerman: Exactly. I think there’s a bit of fantasy happening in our lives as we dream about not being stuck.