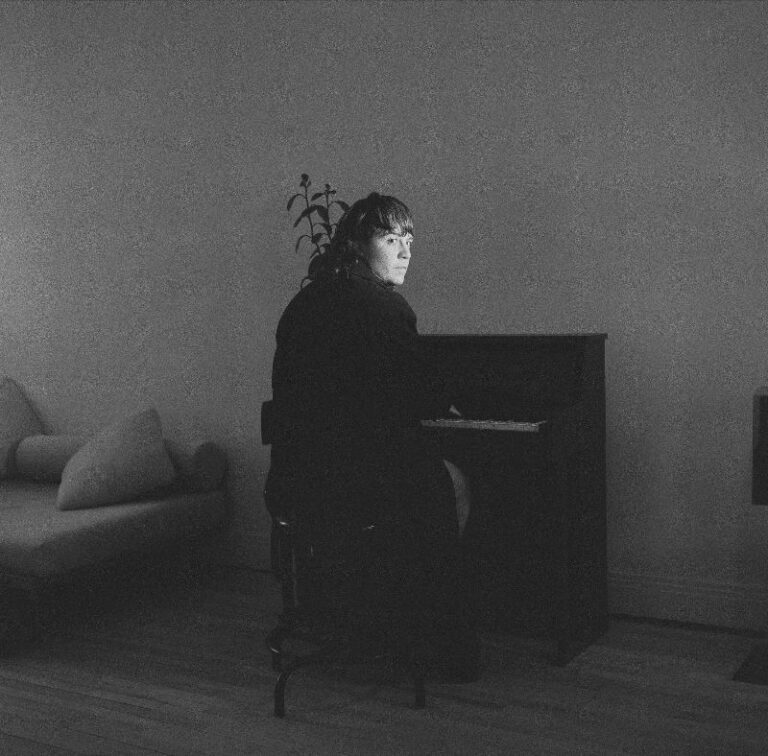 Foxtrott: Songs by the Pair

Although Montreal multi-instrumentalist Marie-Hélène L. Delorme officially carries her experimental pop project Foxtrott solo, her latest independent release shows us that it is, in fact, an elegant and spontaneous dance that is not danced alone, but between her and the instruments.

A composer for film and TV, Foxtrott kicked off her career by singing about the power of liberating energy on A Taller Us in 2015, a Polaris-nominated album of R&B, soul, and electro-pop overtones, which she continued to explore in 2018 with her Meditation I-II-III series. Following the lyrics of her track “Intuition,” Foxtrott finally manages to permanently unite with her instruments in the form of loosely composed EPs in the traditional style of diptych paintings.

Just as Dirty Projectors took us on a journey through an exhibition of EP paintings in 2020, Foxtrott will take us on a year-long journey through a series of spontaneously composed songs in pairs. Made in collaboration with harp and cello artist Ouri, “The Motion” and “Looking for Your Love” are the first pair that reflects a return to softness and innovation for Foxtrott.

While Daniel Ek foolishly told artists to forget the necessary period of creation between two albums, Foxtrott finally demonstrates that artists cannot be reduced to simple products that are ordered and pressed at the factory, in the cadenced and automatic step of the industry.

PAN M 360: Your project reminds me a lot of the one realized in 2020 by Dirty Projectors. This kind of project can potentially create a new relationship to music or a new listening space, knowing that albums are less and less listened to in their entirety. How do you see it?

PAN M 360: How did the idea of the diptychs come about?

FOXTROTT: There’s not really a rule anymore, some artists release 25-piece projects, and some release singles. There’s no right or wrong way to do it, everything works. You have to follow what you want to do. I can’t be constrained in one given form. As an artist, you have to let the art itself guide you. I had no enthusiasm when I was thinking about making an album. When I thought about pairs, I could see the pieces breathing and growing better.

PAN M 360: You even talk about getting away from rigid forms. What do you mean by that?

FOXTROTT: You make the album, you mix it, then the promo… They’re like big cycles and there are times for that. But I don’t think there’s a rule. At the moment, I felt that musically speaking, it was not what I wanted. I wanted to build a project over time. That’s when I got the idea of doing a series. I was working on pieces that always came to me in pairs. I had the idea of bringing out these two pieces that tell a story together, there is a kind of resonance. It’s not the same as going into a bigger story with a 14-piece project.

PAN M 360: For this recording, the vocals are less sung in a pop style and are more processed and worked on than usual. It sounds like you let yourself go into your instruments. What were you trying to experiment with?

FOXTROTT: I’m not really someone who intellectualizes much about what I do. If my work sounds different, it’s because I feel different too. I just play the music that is expressed through me at any given time. I feel that I now have more freedom in using my voice. In this diptych, there are different tones of voice that respond to each other and interact together. It happened naturally, around the textures in particular. There are inner voices and outer voices that respond to each other.

PAN M 360: For you, the creative process starts from the inside out and not the other way around. What do you mean by that?

FOXTROTT: With other musician friends, we notice that a lot of people start from the outside by trying to sound like one style of music or by trying to mix the influence of this artist with that of another artist. I can’t approach music in that way at all. What interests me is to be at one with an emotion that I want to express. Music is used to say things that are impossible to express in words or images. I have an instinctive approach, I just want to let what comes to me rise. For example, “Looking for Your Love” is a love song. I wanted to create a warm, enveloping feeling, like a warm caress. That’s what I was trying to capture and translate with this piece. Something natural that radiates.

PAN M 360: How do you think the two pieces complement each other?FOXTROTT: If I presented only one of them, it wouldn’t work. The two together create a little world. I hadn’t released music in three years and “The Motion” is like my comeback piece. I was working on film music but for the Foxtrott project, I wanted to rework things, and also rest a little bit after the fast pace of the two albums (laughs). I wanted to wait for the music to make me want to share. It came back to me in full force with “The Motion,” it’s a heralding piece for me. I feel like I’m coming back in a new way with a new chapter and a new sound that leads to “Looking For Your Love.” It’s a real love song, which I’ve never done before. I used to talk about love sometimes but always with some doubt or insecurity. I let go of a lot of things, I feel freer. These two pieces express the authentic freedom of who I am musically.