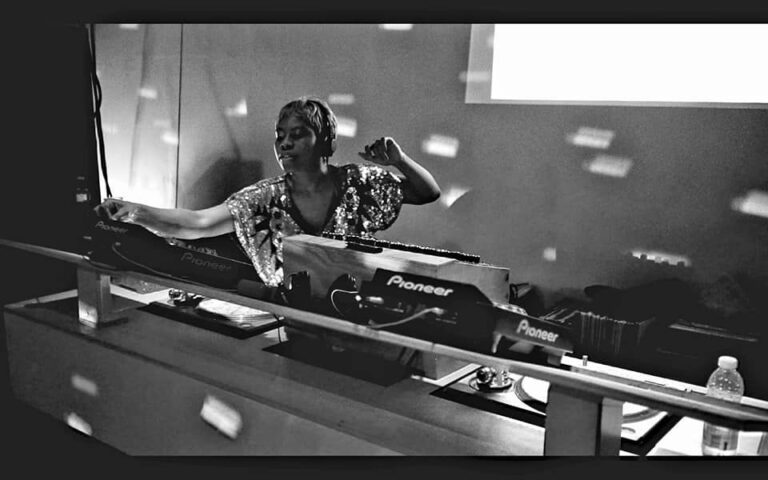 Music-loving parents, a brother who sings in Montreal , uprising star under the name Clerel: for Ellxandra, music is a family affair. After learning the piano and some music theory, the Cameroonian explored jazz, funk and rock fusion sounds with her voice in her teenage years. It was in 2015, during an outing to Stereo – the last afterhour in Montreal – that she discovered electronic music. Upset by this encounter, it didn’t take her long to appropriate the codes of house music, to start mixing, producing and making excellent live performances, as proven by her first EP released in 2021 (Hushlamb) or her participation to MUTEK 22. Meeting with the future of the Montreal house scene.

PAN M 360: Your latest track “Life Direction,” released on Kizi Garden’s label, reminds us of the original Chicago house music of artists like Frankie Knuckles and Jamie Principle. Do these sounds come from unconscious reminiscences or from an assumed direction?

Ellxandra: Oh sure, I’m a house girl, very old school, everything 90’s is really a reference for me, so I’m glad you could recognize that. I wouldn’t say it’s necessarily intentional, to make house music like that, that sounds like that, it’s something that just flows from me. It’s a natural sound for me.

PAN M 360: I also noticed that you use your voice in a very different way depending on the track, sometimes as a rhythmic element that almost disappears in the instrumental, sometimes as melodic lines put forward. How do you approach this part of the creation?

PAN M 360: Listening to a track like this, we notice that there is a big work of spatialization of the sound, is it something that we will be able to find during your performance at MUTEK?

Ellxandra : I integrated this aspect into my work when I met minimal music, specifically. It’s something that struck me a lot when I started listening to this kind of music, the way all the elements were well balanced. Like a perfect soup, a loop soup. What makes a loop interesting? A driving element but also things that go around, and that’s why I started to integrate the modular in my productions and in my live. For MUTEK I don’t bring the modulars, but I made recordings that I come and play, to keep this spatialized aspect.

PAN M 360: About your live show, can you tell us a little bit more about your home setup? What are your favourite machines?

Ellxandra: After that, I have a modular, a mixer, some pedal effects. I actually have the melodic base of this live show with melodic elements from the past live show. It’s a machine called RS7000, from Yamaha. I love it, it’s a bit of a replica of the Akai MPC, I can relate to it a lot. For live performance specifically, I know I’m going to have the TR8 because it’s very jammable. And my sample module, that’s a very important product in my set-up because it’s like a Swiss army knife. A sample player allows me to transition from some tracks to others, but I don’t really exploit the concept of tracks in my live set-up. It’s just several loops that I’ll iterate through.

PAN M 360: You talk about a more intuitive use of your voice, about liking imperfections, is it an approach that you keep for the live, do you go with the flow or on the contrary it’s very framed, meticulous?

Ellxandra: Yes to both, in fact, because for me, improvisation needs a structure, otherwise it’s just “anything goes.” I’m also quite structured mentally in some cases so especially the instrumental elements. I’ll make a soft, flexible structure for the voices I’m going to use and what I’m going to sing. But this is getting out of hand, you know. It’s really to help me on stage, to have a direction. The live show I did for MUTEK last year sounded really different from the rehearsals. Every time it’s different. That’s another aspect that’s very interesting that I like, a form of instability.

PAN M 360: Did you have the opportunity to visit house scenes outside Canada? What did you learn from them?

Ellxandra: I went to the Movement festival in Detroit, oh my God, it was so full of energy and history, I really loved that city. I’ve been to Chicago before, I loved it too. I was in Berlin this summer, a bit dangerous as a city because wow, it never stops! Special mention to Mexico, especially Guadalajara. I spent five months there recently, the scenes are growing, it’s a country of abundance.

PAN M 360: To conclude, a few words about the local electronic scene?

Ellxandra: I would say that it is changing and very diverse. There is so much to say about it. I find that the happiness of this city, it is the comings and goings in fact, it is a city of immigrants, it moves and it feels. We have a very particular scene here, where we are going to be the precursors of scenes that will work later elsewhere. I think we are very innovative.