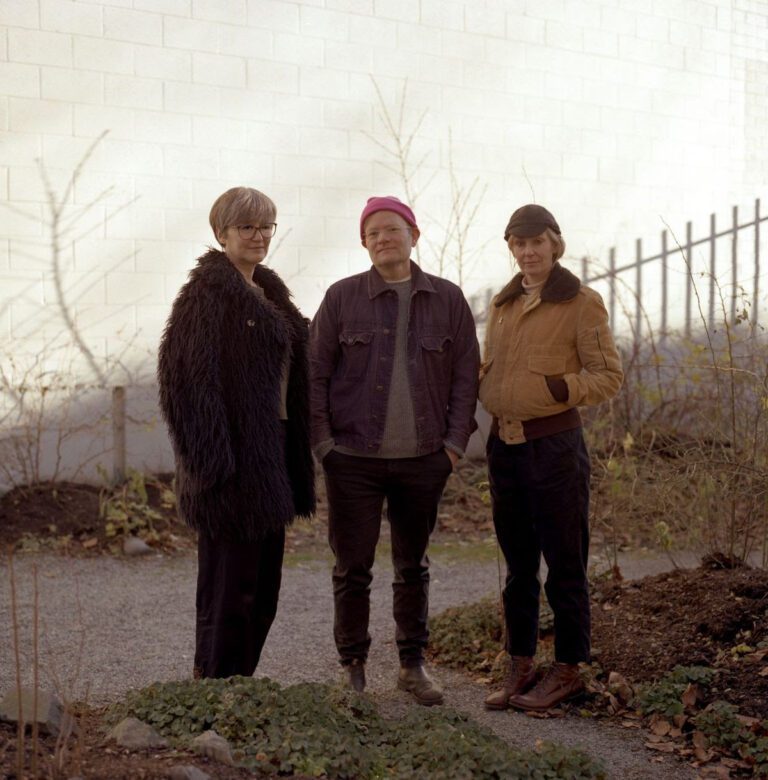 Carey Mercer on the legacy of Frog Eyes and comeback album, The Bees

Frog Eyes, a fiery and beloved indie rock band from Vancouver, had their first release 20 years ago with The Bloody Hand, and in 2018, after the release of their eighth album, Violet Psalms, they called it quits. Two years later, original members Carey Mercer and his partner, drummer Melissa Campbell came back with another project called Soft Plastics but had to fold again due to a band in New Zealand just beating them to the punch for the name. So after dissolving two bands, they went back to the studio again with past collaborator Shyla Seller and created what would eventually be called The Bees, a new record from Frog Eyes that dropped at the end of April. The record started off in the same electro-acoustic vein as Soft Plastics, but they ended up somewhat going back to basics and making the record as they would as Frog Eyes.

“When we started making this record we didn’t have the intention of reforming as Frog Eyes, we were just making a record,” Mercer says. “It was like every cell in our bodies was saying ‘Go this way, go this Frog Eyes way’ with these songs. So we shrugged our shoulders and thought ‘You are who you are.'” And so now we have The Bees, a classic Frog Eyes album in many ways, with Mercer’s untethered vocal approach, indie rock hooks, and general weirdness, but also a new refreshing take on a band that should be as big as a band like Arcade Fire.

We spoke with Mercer on this new iteration of Frog Eyes, the legacy of the band, and some of his inspirations for the lyrical content in The Bees.

PAN M 360: So how did this new album inspire the comeback for Frog Eyes?

Carey Mercer: We started off with a very similar kind of Soft Plastics template, which would be an acoustic-electric hybrid. So you start with the electronic drums, which puts everything in a very structured grid, and then you add a bunch of things, including the acoustic drums, and you end up with this pretty interesting tension between the two. When it came time to learn the songs, Melanie and I just started playing them the way that Frog Eyes played them, which is just here’s the song and they’ll be great the drum beat.

Carey Mercer: Yeah. So we ditched the grid which was very, very freeing, to be honest. Not that I’m not reactionary. I don’t hate music that’s made on the computer. Of course, so much good music is made within you know, a structured tempo, using an electronic template. But for us, it really did feel like an important part of our … the language that we speak is being able to kind of move in and out of time together to create that sense of the flow of speeding up or slowing down. But yeah at the end we laughed and said ‘This sounds exactly like Frog Eyes.’

Carey Mercer: We just kind of shrugged her shoulders and thought, well, ‘You are who you are.’ You can be aspirational in other ways, I think it’s good to have a little bit of aspiration for each record, and kind of a little bit of acknowledgment of the past, but your art is still you, right? So, there’s various, you know, when you make a bunch of records, you can kind of see the 30% You and 70% aspiration, or if it’s 70% You and 30% aspiration. Each record has its own balance in that sense, I suppose. So at some point, we realized we were good at creating this controlled chaos of Frog Eyes and that it’s pretty dope. And we haven’t always felt like that. We’ve felt discouraged by looking at the financial success of our peers and been like ‘Oh we never achieved that,’ and thought ’cause were just not as good.’

PAN M 360: I don’t know I would say on the Canadian indie rock landscape, you have the talents to be as big as a band like say, Arcade Fire. Their music is just more mainstream for a bigger audience and Frog Eyes might be a little to weird and experimental for some people.

Carey Mercer: That’s actually a really important thing for artists, to process your own success of your project. And it depends on what filter you apply. So if you go based on what level of show hall you are playing, a 100 seater, 500, or 1000 seater. Like you can’t measure off of records anymore. So if you go off of the type of venue size, that could be a hurtful filter, because it equates to economic longevity, but it doesn’t necessarily always equate to an artist’s longevity.

PAN M 360: I think that at a certain point in a band’s lifespan maybe you make the decision to make music that is more easily accessible to a general audience or you don’t.

Carey Mercer: Even just how you make the music too. Like when I am conceiving of our sound from record to record, I suppose I do think about spaces. So I’ve kind of come to understand that actually, ours works best within, let’s say 100 to 200 person space. Kind of a small space where the instruments can sound like they actually are. So if you were close to us, when we’re on stage, you will actually hear the kick drum, for example, and you’ll be able to hear how it actually sounds, as opposed to being processed and magnified by a speaker. That’s kind of my jam, is that size venue, and I think if your setup is connecting to a kind of imagined or idealized space, it really does impact a lot of the decisions that you would make. I think that sometimes we can have a really big sound, but it’s not it’s never intended to be staged in a stadium.

PAN M 360: I wanted to ask you about your lyrics in Frog Eyes. They always seem dreamlike and sort of like short stories, but there is always something kind of off to them. They’re kind of like fever dreams to me.

Carey Mercer: Sometimes they are very specific experiences or very specific sense impressions. I mean, a lot of the songs on this record can be boiled down to telling you a story and the story makes sense. You know, if I was to say this song is about the night that my partner and I met. We met during literally the closing minutes of 80s night at this cheesy, kind of electro goth bar. As they were kicking us out she forgot her ID and then we walked home together. But I mean, if you were to read the lyrics, you wouldn’t be like, ‘Oh, that’s what that song is about.’

Carey Mercer: That one is “Here is a Place to Stop.” So we were walking home at 2 am and she said ‘Here is the place to Stop.’ It kind of starts for me at that moment and then it kind of goes through the early moments of our relationship because I think a lot of this record was kind of looking back at what were some important very salient memories or sense impressions that I have from my life. When I think of making songs, it’s very painterly for me. Put a blob here, a blob there, and kind of move the paint around. And that’s how I painted too. I never had an ‘I’m going to paint the sunset on the ocean,’ moment but while I was painting, I might have just experienced a powerful sunset. And that might work its way into it. And so in the same kind with song. You kind of bounce your way into the heart of the song, what should we do usually, the heart of the song has kind of one line or anti line. Sometimes I’ll put a cliche right in the middle. Because sometimes the heart of something feels like a little void.

PAN M 360: I think my favourite song on The Bees is “He’s a Lonely Song.” It’s funny you bring up painting because Frog Eyes songs do feel like little abstract paintings. They change every time you look at or hear them. So when I heard that song for the first time, I thought it was someone telling the listener God is not dead. But after hearing it a few more times, I realized it’s a father telling his son. Is this a memory of yours?

Carey Mercer: Yeah I have a very powerful memory of my dad coming into my room when I was six or seven years old, and he said ‘Can I talk to you?’ and he sat on the bed with me he tried to explain to me using you know the language of his time, the kind of impact of colonialism on his life. And he grew up in the prairies, and he used the slaughter of the buffalo as an example. It was a different time so I’m sure he didn’t use the term, anti-colonialism. But he did talk about the European impact on the place where he grew up, and the colonial impact on Indigenous peoples. And I was six years old, and I was like, Oh, my God, whatever you’re saying is so important because he had never done this before. So I was all ears and I think that conversation had a big impact on me.

PAN M 360: So it wasn’t due to a specific event or anything he just decided one day ‘I’m going to teach my son about this?’

PAN M 360: Are there any plans to tour this new album and get on the road?

Carey Mercer: It’s just the environment is too chaotic to commit to live shows outside of our region right now. This is very frustrating because our region is extremely geographically isolated. The Pacific Northwest, especially Vancouver, Vancouver feels like a big cosmopolitan city but we are actually quite trapped by the borders. You incur, like 1000s and 1000s of dollars of visa processing fees before you even get in your van. And then, of course, it’s so competitive and intense to go into the United States. And then if you’re like, ‘Okay, well, I’m just gonna stay within my country.’ And you don’t want to fly for ecological environmental reasons and I mean, you have this basically impossible wall of mountains you can only get through in the summer. And of course, now, with the wildfires, that’s also kind of intimidating. So it’s an odd time for thinking of yourself as an international musician.

PAN M 360: Not to mention an ongoing pandemic…

Carey Mercer: Of course. You could devote intense energy, intellectual energy, to booking shows elsewhere, and then it can all be canceled by someone coughing at me in the wrong direction at a supermarket. Of course, we did play one show here in Vancouver a couple of weeks ago and it was one of the best shows we’ve ever played. So it’s a great, sad irony where you’re like, ‘We’re finally there. You know, we’re positive about our live performance.’ I don’t know. We’ll figure it out.