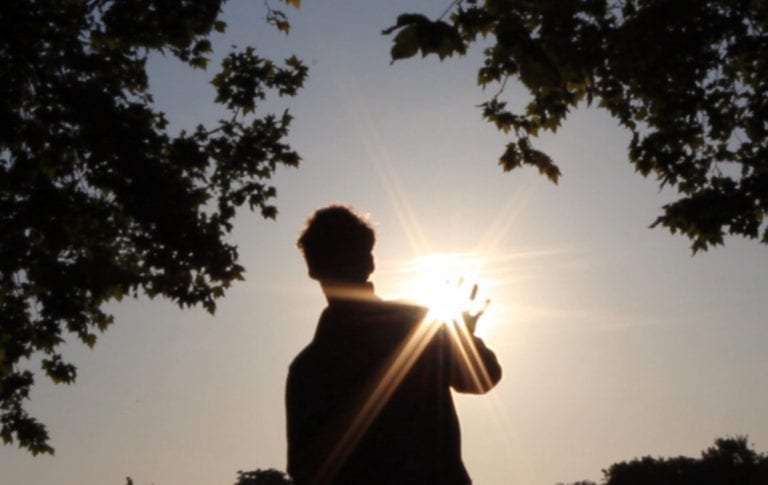 The album A Single Point of Light was conceived, recorded and produced prior to the pandemic. Its creator, Montrealer Ben Shemie, then put this second project on hold for an extended stay in France. The original script called for the release of this album, and then Suuns, of which Shemie is the frontman, was to be back on the road, but… the tour schedule was turned upside down for obvious reasons. So let’s talk about what is tangible for now, that is to say this album created in solitude, with the perception of light as its guiding principle.

Reached in the hip 17th arrondissement of Paris, Ben Shemie didn’t return to Montreal when the pandemic broke out and the borders closed.

“I left Montreal in January,” he says “Then, in Paris, I started an artist residency, I’m there since, I decided to stay after the residence was cancelled. My girlfriend is here, so we are staying cozy in her apartment and waiting out the storm.”

Before crossing the ocean, the musician had finished recording his second solo album in as many years. Like A Skeleton, released in the winter of 2019, A Single Point of Light is another poetic journey into the land of synthetic minimalism.

“I recorded this material in Montreal at the beginning of the winter, so it’s been a few months that it’s been done. I mastered it here, and generally organized the whole thing from Paris, but the actual creation and performance of the record was done at home in Montreal. I’ve been working on other stuff here.”

“I’m doing a collaboration with Chloé, the producer-DJ that’s here. I’m also involved in organizing a radio installation project, and in production with Suuns for an EP that will come out this fall – and we have a new full length coming out next year. Most of this stuff was supposed to happen now, but it’s all been pushed off.”

Since that’s the case, focus returns to the solo project. With A Single Point of Light, Shemie believes that he has strengthened his song structures, that he’s become more invested in this aspect.

“The songwriting is more involved. the actual ‘songs’ are more developed. I’ve spent more time on lyric writing, to be honest, than on the actual composition. I didn’t change my setup at all because I still want it to be mostly improvised and raw. However, it’s less lo-fi, and sonically deeper. I also tried new techniques on the vocals, the melodies. it’s more ambitious.. but not a lot more. I still tried to keep it simple, like the last record. It’s all done in one take – live off the floor, no overdubs. In a sense, the development in this record is actually the development of my live set.”

How was the composition considered, then?

“I think I put more time into writing the lyrics. Okay, but at the same time, the musical aspect is very important, you also have only instrumental parts. Of course, all the instrumental parts are made by feedback. So it’s entirely improvised in the moment. It’s a feel thing. I’ve spent a lot of time learning how to control the elements of the feedback, and getting interesting sounds. But it’s not actual composition, it’s improvisation.”

It can be assumed that modular synthesizers are involved, and…

“No, I don’t use modular synths. I still use the same shitty MicroKorg and the same cheap synths I have for years. I still haven’t gotten tired of what they are capable of, and still discover sounds that I like. It’s very basic, but if you know basic synthesis, you can unlock all sorts of sounds from a programmable synth.”

And that’s why we’re noticing new sounds in Shemie’s palette.

“Yeah. I’m always searching and trying new stuff. I suppose I will get into modular synths, when everyone else is over them. Maybe they will be cheaper then…”

And when this repertoire is played in front of an audience, do we see new improvisations to support the same lyrics?

“Not really. The instrumental parts will be very different, you know. It could go in any direction. The parts where I’m singing, for the most part, are just tunes. I can change the sounds around forever, but the arrangements will stay more or less the same. I’m trying not to mess around with the song parts too much live because those are the hooks of my live show. Also, I like the tunes to remain the same. If I get bored with them, I’ll write more… or use different tunes in my set.”

This way of improvising the music of the songs can come close to a jazz form – always the same structure, but with new variations in real time in front of an audience. What does Ben Shemie think?

“Kind of, but I wouldn’t ever compare my set to a jazz set. It’s not the same lexicon. I have a jazz background, so I get where it’s coming from, but when I improvise I’m guiding the feedback, I’m not ‘playing’ anything. Therefore, it’s kind of divine. Some nights it really doesn’t work, sometimes it’s great. But I don’t practice it, in the traditional and jazz sense of the word.”

Before keeping what’s in the final recording of A Single Point of Light, was there a lot of improvisation?

“I ran the set a lot and I toured the music. I had the transitions tight – which is kind of the hardest part, moving from one song or improvisation to another. but in the studio it all happened in the moment. I spent a lot of time setting up the right circumstances, so the feedback would react nicely, but I didn’t work anything out ahead of time. So, I suppose it is kind of jazzy in that way.”

Will the instrumentation chosen for these two solo albums be kept for the future?

“I don’t know yet. I’ll keep doing what feels natural. Part of my decisions are also about what makes sense for touring. I’m not going to record on instruments that I don’t own or that are really expensive or heavy… because I would never take those instruments on the road. So parts of my decisions are being true to the live show.”

A Single Point of Light is more than a title, Shemie argues, pointing to its unifying intent.

“My records are centered around a theme. This record is about light and our perception of light. figuratively and literally. Some tunes are about light and in its literal sense, other tunes are about how we see the same things, but perceive them differently based on a whole array of different things. Our different points of view, our different world views especially make us see the same things differently. It’s like magic… there it is.”

“A lot of the songs use light as metaphor, or as an image to work with. ‘Magic Eye’ is all about seeing light bent by heat, like in the desert, from a different angle it appears differently. The single ‘Change’ is about changing one physical position to see how someone else sees the same thing – which is really meant to illustrate how you need to change your worldview to see how someone else sees things. Songs like ‘Single Point of Light’ are more celestial and use light to break apart into a spectrum, revealing things you can’t see normally.”

The album strikes a beautiful balance between thought and the emotion that accompanies that thought. This poetic project is linked to a philosophical vision of perception, which Shemie corroborates.

“I didn’t set out for it to be that way, but once you get an idea, you develop it more and more and things come out, different angles that you didn’t think of before. There are also a couple love songs in there too. Because that’s also how I feel. It’s a very personal project.”

As is always the case in his work, Shemie remains minimalist on the lyrical side.

“Simple ideas are always the most effective. My best ideas have always been transparent ideas.”

Beyond the disruption caused by the pandemic, Shemie’s solo projects extend the pause of Suuns, his flagship for expression. Pure coincidence?

“No. We changed things up with Suuns. We needed a break too. It’s been a very intense and backbreaking 10-year stretch. We’ve had some rest, so we are ready to try new ideas and it feels better now. I’m always writing new music and I’ve felt for a while I wanted to try a project in a singular voice. So it’s much more simplified than Suuns. I really didn’t want to try and recreate the sound, or even try to imitate the production of Suuns too much. I wanted a project that could totally crash and that I was totally in control of. Which is where the feedback comes in.”

After the solo experiments, Shemie announces, Suuns will be back in action.

“We have an EP coming in the fall. it was supposed to be a full-length but because of COVID, we couldn’t tour. So we’ll wait until next year for the album. In the meantime, we have an EP of some very vibe-heavy tunes. We have a record… just waiting… it will probably change since it’s weird to sit on music. So likely new stuff will come up and we’ll add to it.”

Another point of light on the horizon…