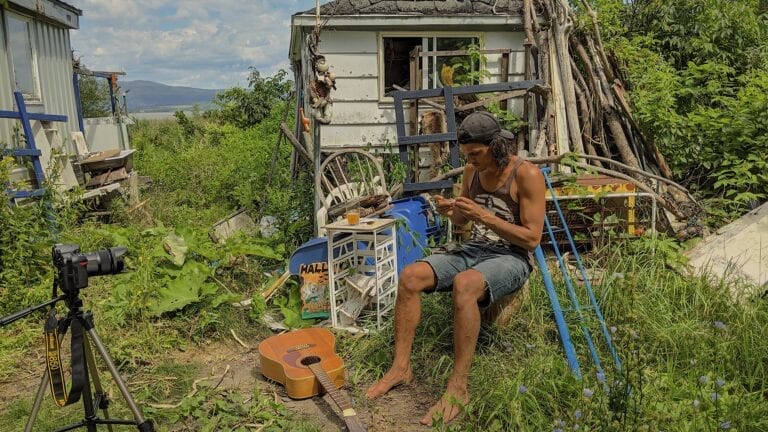 Initially intended as an episode of the podcast C’est nous autres les kings, recording quality decided otherwise. In order to give it a little more scope, I resigned myself to do something as tempting as a dentist appointment, that is to say transcribing an audio interview into text. One, because it would be a shame if the interview got lost in limbo, and two, because Barrdo is worth the detour. A project of PA (Poulet Neige, Fuudge), his third album is about to be released, and Quebec rock fans should really listen to it and take the opportunity to revisit the two previous ones. As they say, you’re in for a treat.

PAN M 360: Some people, because of the pandemic, freeze up, but you seem to have done the opposite.

Barrdo:  I must say, I was already in the beat of doing a lot of songs, the album out on August 21 was recorded in April 2019, L’éternel retour came out in February 2019 but I’d already started this one in January 2019. I was very inspired by my colleague David Bujold, with whom I play in Fuudge, who is inspired by the Ty Segall way of getting stock out quickly and regularly.

PAN M 360: Your forthcoming album (les) méandres de la soif seems to me your most ambitious – there are a lot of strings, the arrangements are rich, and I had the impression that you had put a lot of thought into this one. But now, you’re already working on something else, you never stop, you’re always composing…

Barrdo: That’s kind of the rhythm I’m trying to get into. But at the same time, the new album seems thoughtful and ambitious, but I think the stars have aligned well because it could have gone wrong. I’ve got the Beatles approach, as I say, when recording in the studio I’m not totally ready. I’ve got the songs, the structures, the chords, the melodies, but the lyrics are still to be fine-tuned. That’s the thing that takes a lot of time to get perfect, that I find satisfying. And when we went into the studio for this one, there were a lot of songs where the lyrics weren’t there, some of them didn’t even have a melody. Some of them were pretty much all there, just lacked a bit of work on the lyrics, but there were others where we recorded the rhythm section without knowing what the string arrangements would be, or the melody of the voice and the lyrics. We ended up doing the arrangements, and it all came together, and I think the result is really cool, but that’s it. Sometimes when I go into the studio, I put it like “in God’s hands”, in the sense that I bring the tunes and hope that the magic happens.

Recorded at the famous studio B-12 (Klo Pelgag, Hôtesses d’Hilaire), the album features the same musicians as L’éternel retour – Olivier Benoit on percussion and drums, Nicolas Ferron-Geoffroy on guitar, David Bujold on bass, keyboards, vocals, and more, and of course PA on guitars, vocals, and all the rest, plus a string section. They were lucky enough to be able to immerse themselves in the making of the album for a week, and the experience made PA want to get back into the same state of mind for the album that would follow, (les) méandres de la soif, which was recorded a few days after this interview was conducted, this time at the legendary Studio Wild with the equally legendary Pierre Rémillard at the board, and with the same musicians.

PAN M 360: How does it feel to work with David Bujold, who is also a band leader, when it’s time to work on Barrdo?

Barrdo: We’ve developed a good efficiency together and we don’t think too much about our roles. I also contribute to Fuudge, maybe not as much because David is very autonomous, but when we get to Barrdo, he really understands what I need, he comes up with ideas, he questions others, but I’m the one in charge. And he’s so versatile, plays bass, keyboard, does super-good backing vocals, and he’s also a producer. Having him on the team makes me feel really confident that I’m going to get the results I’m looking for.

PAN M 360: So far we’ve had the impression that Barrdo was mostly a studio project, was it intentional or did it just happen?

Barrdo: It’s true that the pace I set in the studio didn’t leave much time for the stage, and we don’t feel like we’ve been around too much. But with L’éternel retour, it still changed, we signed with Doze Management and the summer of 2019 wasn’t bad. We’ve had six or seven shows, cool shows, not huge but for Barrdo, it’s something. Summer 2020 would have been pretty good too, if there had been shows. But it’s true that there were more songs recorded, more albums almost, than there were shows.

PAN M 360: You’re still prolific. You get the impression that the songs never stop coming out and it’s never in the same niche, it’s very versatile. Do you give yourself a guideline?

Barrdo: No, there’s no guideline, but I feel like over time it’s kind of created itself. There’s a consistency. I compare it to eclectic artists, Zappa for example, you listen to some albums and there’s some weird stuff, but if you take a step back from the general work, you see that there’s stuff coming back, that there’s a coherence. On the three albums, some things come back, spirituality and existential questions are very present, it’s a form of coherence. Eclecticism is a kind of coherence in itself. It’s when we put together everything we do that we realise that there are things that will be classifiable, but since we don’t give ourselves directions, it’s the final result that does. It all depends on the compositions at the beginning. On this album, there are different styles, like pop, orchestral, folk, and I think we went a little bit more classical, some moments more classical music…

Barrdo: It’s not Yes, but it’s often there, especially in the song structures.

PAN M 360: Is it something you think about when you’re composing, when you think, I’m not going to do the same thing I’ve done before, or do you leave the creation free and at some point, you have enough songs to go in the studio and it gives you an album?

Barrdo: I don’t put stylistic barriers up, I see songs as children, seeds that you plant and watch them germinate. I’ve got a month’s free creative time where I record my ideas, and when I come back to it later, it’s like children who’ve developed their personalities, the songs define their style. It also depends on what I’m trying to do, whether I’m trying to emulate something or someone. On the last album, there’s a song where I tried to do something in the Herbie Hancock style during the Sextant period, I wanted to do something more fusion, more jazz, like Bitches Brew. It’s not pastiche, but it’s inspired by. Sometimes it’s Gainsbourg. It’s all influences of the moment that I’m using.

PAN M 360: You’ve signed up for bookings but you’re still independent for the albums, have you tried to get a label, or would you rather be independent?

Barrdo: I tried a few times to be on a label, but I always arrived too late in the process, everything was done and the labels answered me that they didn’t know what to do with it, that the time before releasing an album didn’t fit with what I had decided. I was ready to release, but it was too fast for them. It would have been especially handy for grants, because as an independent artist, it’s hard to get funding. And even what exists, we didn’t get it. I pay for everything out of my own pocket, in fact I pay for the choices I made for the project. It’s not ideal, but that’s also my responsibility.

The audio version of this interview is available in PAN M 360’s Podcast section.