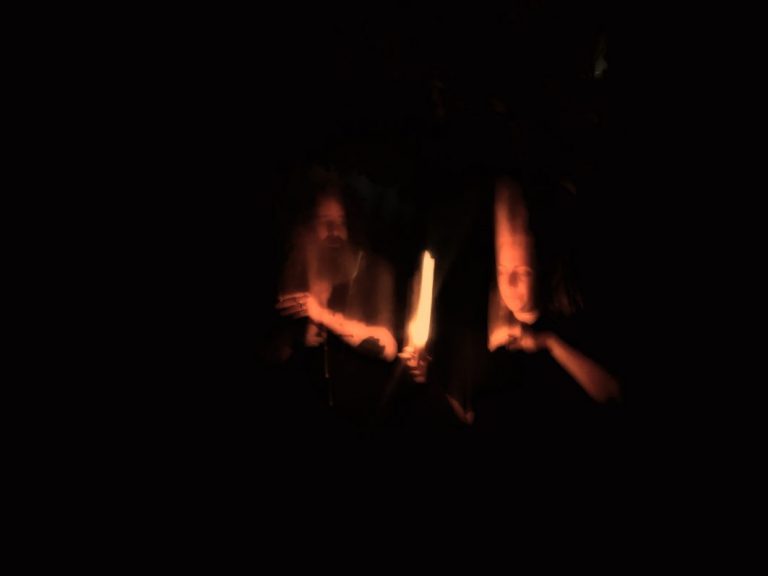 All Hands_Make Light: Sounds That Shine

Godspeed You! Black Emperor (GY!BE) and Thee Silver Mt. Zion Memorial Orchestra, cult bands in which multi-instrumentalist Efrim Menuck plays a central role, have little to do with All Hands_Make Light, a new project being showcased this weekend at POP Montreal and coinciding with the official release of a first independent recording.

The same goes for Montreal singer/songwriter Ariel Engle, better known under the alias Laforce for her solo projects, not to mention her regular participation in the Toronto collective Broken Social Scene.

This brand new duo comes from the Anglo-Montreal musical movement of the last two decades, but the aesthetics of each did not suggest a common creation. But the meeting did take place during the months of quarantine and so here is a new creature, a superb creature, perfectly distinct from its progenitors.

All Hands_Make Light offers a game of contrasts where celestial airs and subterranean lava dialogue, where dark ambient is in harmony with ethereal wave, where electronic techniques and the human voice generate life.

Given the high quality of the sound results, PAN M 360 went to meet this excellent duo, reinforced on stage by Erika Angel (Thus Owls) and Jace Lacek (The Besnard Lakes).

PAN M 360: Don’t you think the adding up of the two of you makes a third character?

EFRIM MENUCK:  Yeah! I feel something like that. We balanced each other well. We are very different, our senses and aesthetics are different. At the same time, we know each other, we respect each other. I feel we both bring different things out of the other person.

ARIEL ENGLE: I think we’ve managed to represent ourselves in the duo but yes, it’s very different from who we are artistically, each on our own. It’s like making a baby, different from its parents!

EFRIM MENUCK: I finished a rough tour, I remember I came home and I just felt deeply unsatisfied with what I was doing and then I started to think I should do a simple duo thing with someone singing. A collaboration. And  I was too shy to phone Ariel because I didn’t have a clear idea… the extent of my idea was only what I just said: collaboration with someone else singing.

ARIEL ENGLE: I had run into Efrim on the street near Martha Wainwright’s Ursa club to hear Jennifer Castle. I’ve known Efrim for a long time and he put the idea of a project in my ear and we went to the concert. Then the lockdown started and I had this idea running around in my head. I wrote to Efrim to find out more about the idea. The ball started rolling, he sent me the music for “Lie Down in Roses Dear”, which is the first song, and then he sent me the lyrics and I sent him back the vocal melody. Really, it wasn’t complicated.

EFRIM MENUCK: Yeah, very easy. When things didn’t work, we both agreed to change it. Yeah, that was quick and easy, you know. So we bumped into each other and we vaguely planned a phone call. Then COVID happened, we both had tours cancelled and we were  stuck at home… So why don’t we start now! And so all I know at that time about Ariel is that she has a beautiful voice, that she is a good improviser and can surf on top of anything. She has a deep musicality. Lot of people got hung up by perfect tone, perfect harmonies… not in her case. I know she wouldn’t be freaked out if the chord was distorted, turned upside down or a little detuned, she could find a way. So I just sent her some recordings that she could sing on top of it. And it sounded great. Yeah, it all happened very quickly. And after, it took a while to finish.

PAN M 360: Did you discuss your differences during the creative process?

ARIEL ENGLE: We didn’t talk about the aesthetic mixes. I thought the work was strong enough, quite marked, I just had to let myself go in there. I’ve always liked contexts in which I could be quite free. My music is a bit more pop, but I really like music that involves improvisation. Efrim and I share a lot of the same musical tastes, even though our respective projects don’t sound the same.

PAN M 360: The extremes are very beautiful in this music, heavenly and dark at the same time. Do you feel that way?

ARIEL ENGLE: Sometimes I felt overwhelmed by the sounds and sometimes there was this great delicacy. I love that contrast! In fact, I don’t know exactly how to describe this work, the roughness of which is not linked to any tradition. There’s something old and new about it. I like the opportunities where I can make music that can surprise me. And when I listen to music, I have to feel the truth of it, without knowing exactly what defines that truth. That’s what this project allows me to do.

EFRIM MENUCK: Sometimes it takes a crazy amount of bars for a melody to resolve itself. And from the start we were talking about stuff like that, and because I was playing synthesizers too, I was interested in tones that sounded electronic but that did sound like reeds, strings, bringing that out of the instrument itself, raspy breath sound. So we have this rough conceptual idea, a sort of electronic breathing machine, and then using old melodies, and old ideas about what popular music is, which is a kind of folk music.

ARIEL ENGLE: All along the creation I was singing, I was finding the vocal melodies and Efrim was doing most of the music. Somewhat by accident, we recorded the songs in the order that we present them in the final recording.

EFRIM MENUCK: There was a modular synthesizer, which is very fussy, very hard to play live. Using a Moog keyboard with a few filters, the timbres are changing, it’s still the same idea, it’s still breathy but it’s different obviously because the equipment is different. But it’s cool.

PAN M 360:  Surprisingly, or maybe not, there is no guitar in this music.

EFRIM MENUCK: Yeah, it’s cool to be in a nice space, different from a guitar-oriented space. The guitar is a stupid instrument. I love it but its a stupid instrument. It’s hard to keep in tune, it hurts to play it, it’s a tense physical engagement, even though I love playing it. But it’s also nice to play with other instruments that are not fighting with you all the time. So it’s nice to play long, fast melodies and not feel like your body is gonna break doing that.

ARIEL ENGLE: The lyrics are mine except for the first song, “Lie Down in Roses Dear”, and “To Raise a Child”, where we sing our respective lyrics.

PAN M 360: Did you work hard after the first takes?

EFRIM MENUCK: There hasn’t been much editing. Everything I gave her was already full of stuff. So instead of editing, we were removing things, you know? There are some things that took some time to figure out but most of it hung together well, even the first few attempts, which was great and surprising. After that it was a process of  refinement, I’m still more used to like you record stuff and then you realise it doesn’t work, and then you have to figure out you gotta make this part work you know. You strip everything down, then you rebuild it back up again. In this case, there was none of that, that was very nice!

ARIEL ENGLE: We had only completed the work at Hotel 2 Tango. We did everything together without adding new musicians.

PAN M 360: Why then add some musicians live?

EFRIM MENUCK: Because  there are too many tracks for voices and instruments to play in a live context. So Erika Angel and Jace Lasek will join us playing keyboards and singing.

EFRIM MENUCK: Yeah, we’ll keep doing this as long as it makes sense. We really enjoyed playing together, even though it wasn’t the best circumstances. It’s a very different process, not being in the same room. So I’m excited to see what happens in the future, sitting down and working on stuff together.

ARIEL ENGLE: It could go on for a long time… Efrim is very busy and I have my project Laforce, which I’m finishing the second album. I’m also a member of Broken Social Scene–I’m married to one of the musicians in the band, Andrew Whiteman, who is also known in the band Apostle of Hustle. So that’s to be seen. But it went very well, we did this project with no expectations, no pressure, just fun. It would be great to continue, we still have things to explore together, other than by exchanging files. It would be very cool to see what we could do together.

All Hands_ Make Light is performing at Pop Montreal on Saturday 25, 3PM, L’Entrepôt 77 on Bernard-Est