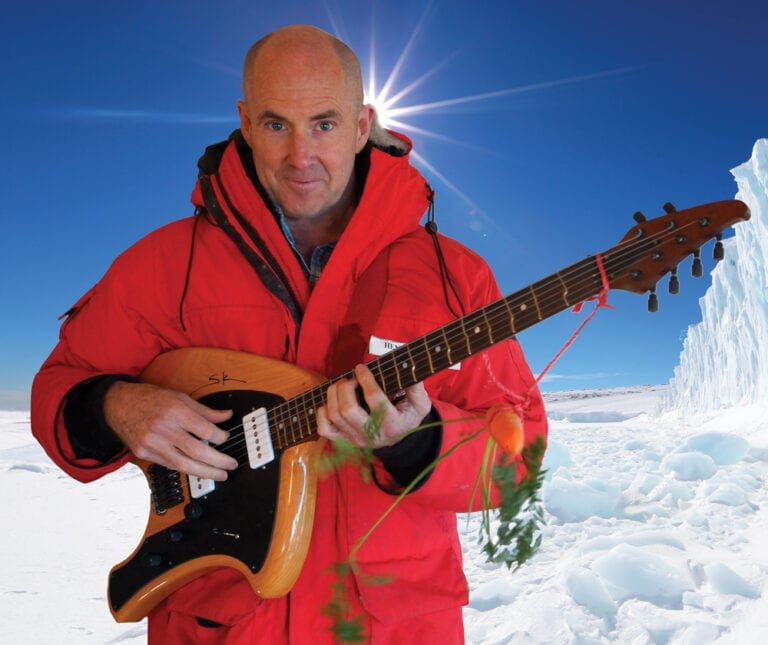 A Love Supreme Electric: Henry Kaiser and his electrifying colleagues

John Coltrane’s mythical album A Love Supreme is the pretext for electric and all the more electrifying rereadings, piloted by guitarist Henry Kaiser and his acolytes.

A suite in four parts – “Acknowledgement”, “Resolution”, “Pursuance”, “Psalm” – the music of A Love Supreme is considered the most outstanding work by John Coltrane and his famous quartet of drummer Elvin Jones, pianist McCoy Tyner, and bassist Jimmy Garrrison. Recorded in 1964 and released in 1965 on the Impulse! label, the album is without a doubt a great classic of contemporary jazz. The program includes melodic-harmonic and rhythmic explorations, incantatory and paroxysmal phrases, conducive to individual and collective expression. The saxophonist’s inspiration was the result of an intense quest, as different forms of mysticism and the discovery of new sound dimensions had led him to create this extraordinary work.

Guitarists John McLaughlin and Carlos Santana had tackled the first movement together in the context of the album Love Devotion Surrender, released in 1973. Since then, many musicians have given it a shot, and it’s a must for any self-respecting jazzophile. In recent years, guitarist Henry Kaiser and drummer John Hanrahan have been bringing together different groups and casting a new, electrified light on A Love Supreme.

PAN M 360: For the past few years, you and John Hanrahan have been performing electric versions of John Coltrane’s Meditations and A Love Supreme suites, with different musicians. I watched a few concerts by those bands on YouTube, with your explanations. Can you explain your relationship with this masterpiece?

Henry Kaiser: Actually, I never have listened to Coltrane a lot! The albums I enjoyed most and did listen to are Meditations, Ascension, Live at the Village Vanguard Again and the two Live In Japan albums. So the more free-jazz-type Coltrane, with Pharaoh Sanders also on sax, is what I relate to. I spend a lot more of my “free jazz time” listening to Cecil Taylor, Sun Ra, and Albert Ayler.  I see Coltrane as being an immensely important feature in the whole landscape of ’60s free jazz. I am not so much of a Coltrane fetishist myself. I’ve probably spent fifty times as many hours listening to Cecil Taylor.

PAN M 360: The Love Supreme recording on Impulse! is one of the rare modern jazz albums that had an impact on a very large audience, beyond jazz. Hippies and psychedelic-rock fans in the ’60s loved it, and the following generations loved it too. Up to today, it remains one of the rituals any music lover must undertake. How do you explain this huge impact over the years and decades?

HK: I think it is an amazing landmark in free jazz that appealed to a mainstream audience. A magic album in magic times! Now… I wonder why that’s so, in the spiritual sense? Of course, when he made his spiritual invocation on A Love Supreme, he was likely thinking of the God of Baptist Christians. However, a Korean traditional musician recently asked me why and how Coltrane could be playing gugak (Korean traditional music) phrasing on A Love Supreme. I took a look at discographies of Korean traditional music releases in the USA at the time of A Love Supreme and before — and there was nothing that Coltrane could have heard to get that from. My theory is that he unknowingly invoked the spirits that animate Korean shamanic music. Very powerful spirits, which I have experienced when playing shamanic music with Korean musicians. And that they led Coltrane down paths of musical expression that made the music so successful.

PAN M 360:  All your life, you’ve never been a straight-ahead jazz musician. You’ve mostly been dedicated to improvisation in a general way, and a lot of experimentation. What motivated you to do this cycle of reinterpretation of Coltrane’s mid-’60s music?

HK: It seemed like both a fun thing to do and an interesting challenge. Also, the things I learned studying Miles Davis music in the 1973-1975 period, in my Yo Miles! band with Wadada Leo Smith, provided an intriguing key for decoding Meditations. I think Agharta  and Pangaea have a lot more in common with Meditations than anyone who was not in the Yo Miles! band would realize.

PAN M 360: What are the music qualities of the music of A Love Supreme – harmonic structures, rhythm, interaction, solo or collective improv, etc. – that led you to make something different with this music that’s more or less considered classic today?

HK: It’s not the Western concepts of melody, harmony, and rhythm. It’s things like narrative, storytelling, timbre, timing, space, proportional rhythms vs. divisional rhythms, shamanism, the teleology of music, and the psychedelic qualities of music without drugs. Those kinds of considerations are what I was thinking about and acting on.

PAN M 360: This music is based on open structures, where the improvisational vocabulary and individual expressions are quite important. What did you want to add? Also, how did electric instruments change the music? About an electronic approach for the future?

HK: Carlos Santana and John McLaughlin pointed the way to an electric interpretation of A Love Supreme on their Love Devotion Surrender album. I saw that band twice, before I played guitar professionally on their promo tour. And that stuck with me. Meeting the drummer John Hanrahan led me to performing and recording the entire suite, and once I studied things more closely, I felt that A Love Supreme and Meditations were two parts of the same story. And that is something that’s essential for the listeners to understand in this release.

PAN M 360: When we listen to your personal versions, we feel a deep respect for the initial forms. So what is the tension between the original recording on Impulse! and your different versions?

HK: We don’t even think about it. There is no planning. The music just plays us. We don’t play it. I’m sure that was true for Coltrane with ALS and Meditations – the alternate takes support that. There is no road map or flight plan; it’s a different exploration into new territory every time.

PAN M 360: You’ve played with different musicians since you started the project. Can you describe the main ensembles, and explain briefly what you have achieved with each of them?

HK: Mainly, it’s me and drummer John Hanrahan. It’s different players most every time.  You can see another band here by going to the Cuneiform Records YouTube page and looking through my Weekly Solo series.

PAN M 360: Why has this line-up been chosen for the recording? Maybe it’s just a matter of availability?

HK: We were playing A Love Supreme Electric gigs with different players every two or three months, and Wayne Peet, the organ player on the album, had his own recording studio, so it was easy to record.

PAN M 360: Playing Coltrane music puts you under a different spotlight: you could face different reactions from people that don’t exactly know your work and love A Love Supreme. Do you enjoy the challenge?

HK: There’s not much challenge. It’s become second nature to approach this music for us. And there have never been complaints from the audiences. We all just have a very good time.

HK: Applying elements, both musical and sociological, from Korean shamanic music to the Coltrane material.

PAN M 360: Can you describe your other current and future projects?

HK: I am just now, today, mastering an album with Stein Urheim, Benedicte Maurseth, Danielle DeGruttola and myself for the Norwegian Jazzland label called Be Here Whenever.

Forthcoming releases in 2021 are:
A new quartet album with Ray Russell.
A trio album with Wadada Leo Smith and Alex Varty.
A new solo guitar album.
A fusion album with me, Andy West, Chris Muir, Lukas Ligeti, and Stephan Thelan.
A free-improv quintet album with me, Danielle DeGruttola, Lisa Mezzacappa, Soo-Yeon Lyuh, and Nava Dunkelman.
An ambient guitar duo with Anthony Pirog.
A cover of Steve Lacy’s album THE WIRE with me, Bruce Ackley, Andrea Centazzo, Michael Manring, Tania Chen, and Danielle DeGruttola.
A quintet album with me, Binker Golding, Eddie Prevost, N.O. Moore, and Ollie Brice.
And I’ve probably forgotten two or three others in the pipeline…

My weekly video show at Cuneiform is always here.