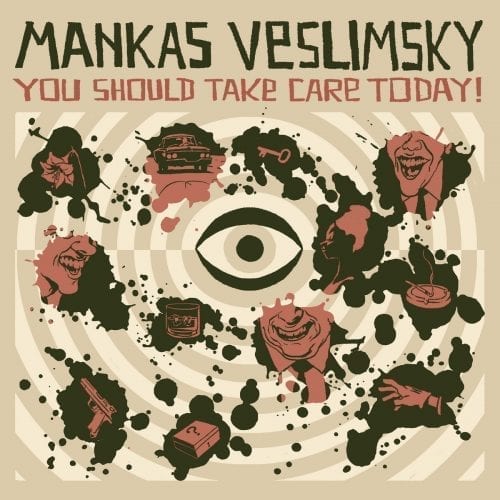 Amnesia Prenatal is the Buenos Aires studio and label that’s home to the numerous projects involving composer, producer Lucas Alves de Lima, like the elaborately bizarre big-band Helmut Róbot, the eccentric folk/baroque of Aberratio Ictus, and assorted indulgences in rock, metal, electro – oh, and imaginary film soundtracks, a specialty of his for two decades now, it seems. Mankas Veslimsky is his pseudonym for this  elegant, excellent exercise in scoring a phantom thriller flick.

Stylistically, it’s a pleasant stumble through the decades, from post-war film noir to ’70s Italian poliziotteschi, dutifully saluting the masters of the form – Herrmann and Schifrin, Mancini, and Morricone. The cover by comic artist Juan Sáenz Valiente, for whose new animated short film El olvido Alves de Lima wrote the score – likewise mimics the punchy film posters of the era perfectly. It’s all executed with panache, as well as great attention to detail.

The nimble, nervous “Human Chaos” starts things off with a bang, and from there it’s a brisk montage of suspense, intrigue, sudden alarm and bodily harm, doomed romance and decadent desires, and of course a constant flow of cigarettes and whiskey, to afford the theoretical protagonist some perspective in a world gone mad. The even dozen pieces concludes with the appropriately weepy “Farewell” – only to have track number 13, the hectic, hair-raising “Dancing With Chemicals Ghosts”, barge in as the party’s winding down, and it’s bad luck for anyone hoping to get a good night’s sleep.