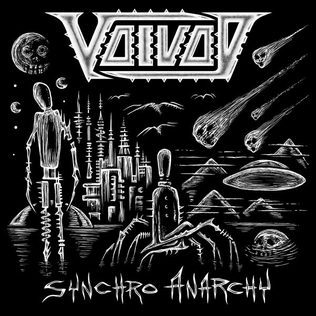 As voïvodologists will have noticed, and as guitarist Daniel “Chewy” Mongrain will have confirmed, “Paranormalium,” the first song on Synchro Anarchy, begins with the motif heard from the 8th minute and 42nd second of “Sonic Mycelium” and which is repeated by a string quartet until the end of this song, the last one of The Wake, Voïvod’s penultimate album released in 2018. This melodic link perfectly symbolizes the cohesion of the Voïvodeanum Corpus. Because, if you have followed the course of this band during the last four decades, you know that this discography is one of the most coherent in heavy metal. Or of any metal. With Synchro Anarchy, Voïvod’s studio album count reaches 15. Voïvod still has two of its founding members, Michel “Away” Langevin and Denis “Snake” Bélanger. Precision guitarist Daniel “Chewy” Mongrain and bassist Dominic “Rocky” Laroche have been with the quartet since 2008 and 2014, respectively.

Listening to these nine new songs, the musicophile will notice that Snake and Away know the thrash-prog-metal musicosphere like no other … for the simple reason that they invented it. As for their two slightly younger companions, not only have they grasped all the subtleties and complex rules of this micro-universe, but they’ve added a whole lot to it. Listening to Synchro Anarchy, the musicophile is at first reassured because they instantly recognize the Voïvod sound. Then, anxiety sets in, and during the bend of countless abrupt time signatures, we dive into the unusual; because Langevin’s tireless hammering, Mongrain’s microsurgical impulses, and the ductile swaying of Rocky Laroche’s bass seem to come from an unspeakable underworld. And Snake Bélanger’s voice always seems to be hovering at the brink of madness, just like HP Lovecraft’s mountains.