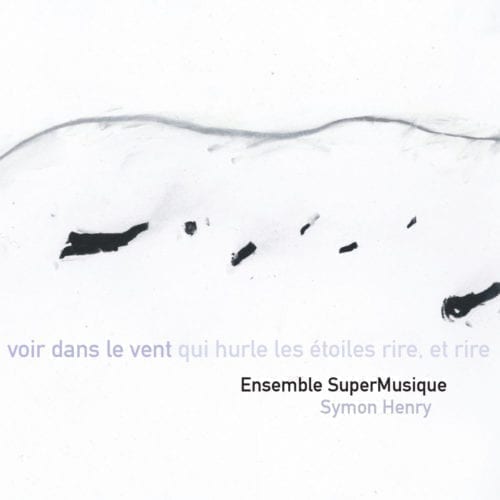 When I received a copy of Symon Henry’s graphic score for his work Voir dans le vent qui hurle les étoiles rire, et rire, published in collaboration with Éditions de la Tournure in 2016, I regretted that it was not accompanied by a recording, especially since the creation of the work had been entrusted to the Orchestre symphonique de Québec. At the time, it was a mixed score, with elements of standard notation, the original version having been co-written with composer Yannick Plamondon. Here, the ten or so musicians of the Ensemble SuperMusique, under the direction of Danielle Palardy Roger, have only the graphic part of the text in front of them, which nevertheless extends over 168 pages. Mostly made up of long sinuous lines that cross the pages horizontally, the score inevitably results in a series of glissandi that criss-cross from one end of the piece to the other, with here and there a few “rhythmic” gaps, sprinkled with brief silences. The piece, which according to the composer’s note, “gives us the laughter of the stars, the howling of the wind, the exultation of the bodies”, develops slowly, in a rather static manner, until a climax that arrives, surprisingly, in the penultimate movement, before being torn to shreds in the last. As is often the case in an abstract visual work, it’s the detail of the interplay of textures and colours that catches the attention, rather than the general form, in meditative mode, which could literally be circular.