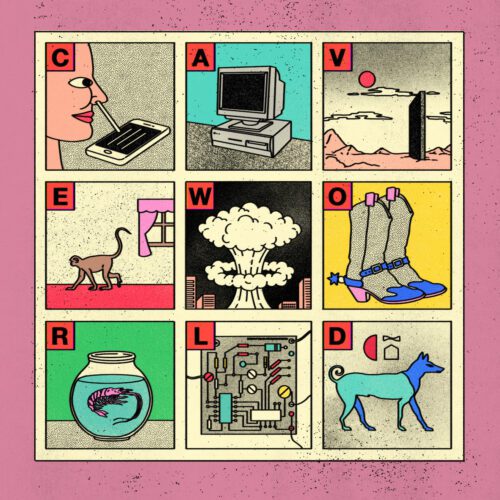 After two albums, three EPs, two live albums, and a good handful of singles in less than four years, the prolific Viagra Boys are back with a third full-length effort. Produced by their former collaborators Pelle Gunnerfeldt (The Hives, The Knife, etc.) and DJ Haydn, Cave World offers 12 tracks (3 of which don’t exceed 45 seconds and are used as bridges between some tracks) still as crazy as ever, but with a stronger emphasis on the groove. Moreover, the most danceable tracks stand out on this new album of the Swedish combo. Here, the flammable disco-punk cocktail of the VG asserts itself more than on the previous Welfare Jazz of 2021; songs such as “Troglodyte,” “Punk Rock Loser” with its groove reminding of the Dandy Warhols, “Ain’t No Thief” which brings us back to the first tracks of the VG (notably the classic “Research Chemicals”) with its big bass, as well as the electro-punk “ADD” which should have no problem to find its way to the dancefloors of some clubs… Other tracks, like “Big Boy” with its bluesy approach and the more complex “The Cognitive Trade-Off Hypothesis” demonstrate – once again – that the Boys like to venture out of their comfort zones (note the use of the plural). Thematically, Cave World is inspired by the chaos and absurdity of the world’s current climate, as a jovial satire comparing the ridiculous and horrific trends of mass shootings and science denial to caveman life. After releasing this third record, the VGs decided to throw it all away and go back into the studio to re-record the album, changing some of the music and lyrics in the process. We’d be curious to hear what the first draft sounded like, but in the end, this second attempt proves to be quite convincing and might be the most convincing thing the VG have done since 2018’s Street Worms.