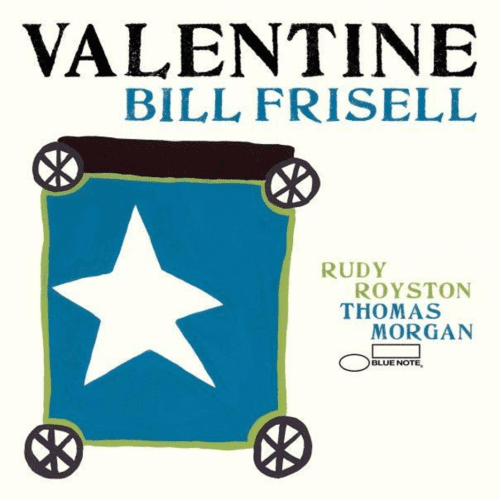 The ECM label recently released two excellent albums featuring veteran guitarist Bill Frisell and double bassist Thomas Morgan, Small Town (2017) and Epistrophy (2019). With the release of the over-fresh Valentine on Blue Note, a third player joins the party in the person of drummer Rudy Royston, a frequent collaborator with Frisell since the adventure of Beautiful Dreamers in 2010. However, the trio is not new to the game, having played live two years before the recording of this new album.

The program contains a few new pieces, but mostly rereadings of works that Frisell has performed at one time or another in his successful career, whether it be his own compositions or covers of pieces by Boubacar Traoré, Billy Strayhorn, or Burt Bacharach. All this recycled material may suggest that the guitarist has his eyes on the rearview mirror, and wouldn’t dare venture outside his comfort zone. That would be overlooking that in Bill Frisell’s case, the zone in question encompasses many territories: jazz, country, folk, avant-garde, gospel, tin pan alley, atmospheric, delta blues, desert blues… Our man is at ease on many terrains and on Valentine, he chooses not to choose. Supported by his two faithful companions, he introduces them all.

This admirable eclecticism is only one of the reasons we’re ecstatic about this very successful album. Also to be applauded are the cohesion of the trio, the crystal-clear guitar sound and Royston’s playing, which brings a new dimension to the work previously started with Morgan. We can also add the big heart of the guitarist who chose to conclude things with a rendition of “We Shall Overcome”, an old protest song sung many times during the African-American civil rights movement. A most relevant choice!