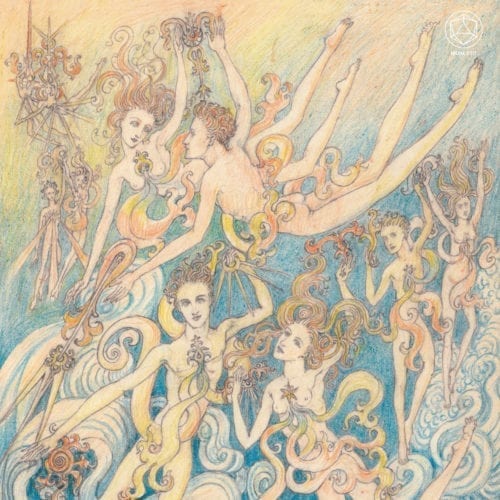 The duo, active since 2015, offer their second album, matured over four years. Both members have long and impressive track records – Pilkington has a long history of releasing “unpopular culture,” according to the Strange Attractor Press website. York, a multi-instrumentalist with numerous projects, has collaborated with bands as mythical as Coil and Cyclobe.

Together, they create music in the kosmische tradition, which is the ethereal strain of krautrock, stripped of its rock influences but marked by its exploratory impulses. This mix of vibrant textures, synthetic and organic, is skillfully unified. York’s wind instruments, which include bagpipes and flutes, are combined with a strong command of analog and digital devices. The result, according to the duo’s artistic mantra, is an exhilarating “exploration of nature and electricity”.

The album opens with a deafening wave of bells. The spatial melodies in the background take over. “Come! Vehicles of Light” provide a weightless introductory ascent. “An Unexpected Visit” features an unreleased incantation from the 1980s by occultist Alex Sanders. His voice, whispering, sighing, is swathed in celestial soaring, accompanied by a basso ostinato. The lament fades with the sound of the waves. The ten-minute title piece, serious and grandiose, is a veritable cosmic storm. The periodic soundings of a deep bass sustain a transcendental cacophony where the rumblings of the distorted guitar rival the bagpipes. As on many pieces, one has the final impression of a blueprint, with everything where it should be.

Each piece, beautifully crafted, is made of dissonances resolving into fine melodies, against a background of peaceful repetition.