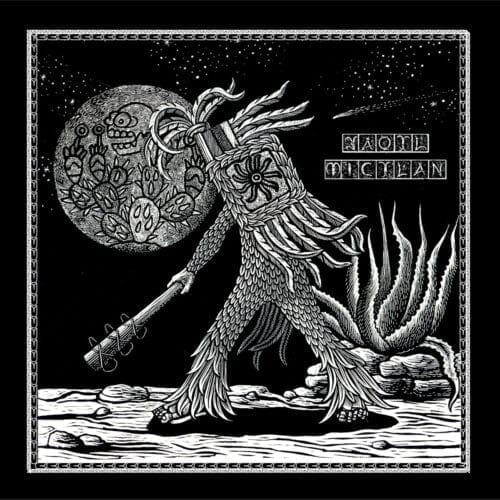 One day, the god Tezcatlipoca descended from a spider’s web hanging in the sky, and landed in Tula. He then hid his face, mingled with the crowd and managed to get close to Quetzalcoatl, his brother, king of the Toltecs. Tezcatlipoca then corrupted Quetzalcoatl by getting him drunk and showing him his ravaged face in his shimmering mirror… Such is the tale related by black metal band Yaotl Mictlan on “Tezcatlipoca – Espejo relumbrante”, one of the eight tracks on their new album Tierra sagrada del Jaguar. Yaotl Mictlan – which means “warriors of the kingdom of the dead” in Nahuatl – came to be in a basement in Salt Lake City in 1998, the creation of two brothers of Mexican origin, Yaotl and Tlatecatl, who’d emigrated to the United States in their early teens. Tierra sagrada del Jaguar is their third opus, after Guerreros de la tierra de los muertos (2006) and Dentro del manto gris de Chaac (2010).

Yaotl Mictlan combines what the brothers Yaotl and Tlatecatl are most fond of: pre-Hispanic culture, especially its rituals, beliefs and mysticism, Aztec and Mayan music, as well as black metal. “If Norwegian bands combine Scandinavian mythology and paganism with black metal, why wouldn’t we do the same?”, our two brothers once said to each other. Very few musicians ventured into this niche at the time; a few followed, like their Mexican compatriots Ahpuch Oztoc.

Yaotl beats the skins, Tlatecatl sings, Nahuali and Xolotl accompany them on bass guitar. These artisans ingeniously integrate sounds from a panoply of Pre-Columbian wind and percussion instruments into their fierce foundation. At the beginning of “Entre lluvias fuertes”, a horn with an ancient and lugubrious sound, arpeggiated guitar chords, the crackling of a rattle, bloodcurdling screams – emanating from a man, a jaguar, or some creature half of each? – and flute notes (on a human bone, no doubt), before the black-metal artillery thunders. Another example is “Buho lanzadardos – Entrada Teotihuacana”, with its Mesoamerican intro, followed by a furious homage to the chief “Spear-throwing Owl” (the Buho lanzadardos of the title), who is said to have ruled the town of Teotihuacan for some 60 years.