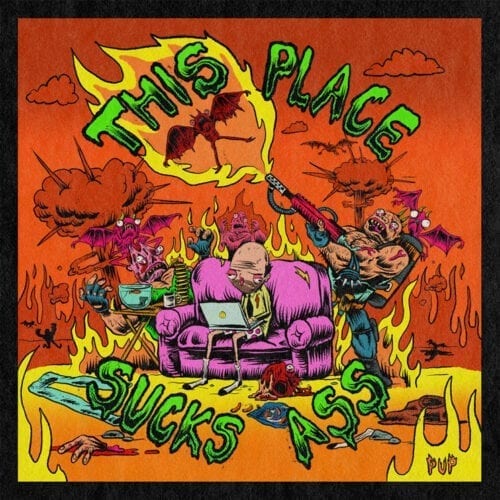 Another salvo from the Toronto punk-rock band with This Place Sucks Ass, a six-track EP that’s more than enough to vent our social frustration. Times are tough and PUP have decided to put their sweet sounds on CD, with equally sweet lyrics. This irony and sarcasm, the band is accustomed to, and this new recording is no exception. With a very critical eye and a streak of humour, PUP opens the ball rolling with “Rot”, a tune of boundless rage.

In the anxious world we’ve been living in for almost eight months now, this EP by PUP, with its raw and spiteful lyrics, sums up the situation fairly well. The accumulated frustration is echoed in the strident riffs of “A.M. 180”. A few well-distributed pop elements soften the whole thing a bit, like on “Nothing Changes” or “Floodgates”, originally intended for the album Morbid Stuff, released last year. But even if the vocals and the rhythms are more pop-rock, it doesn’t take anything away from the overflowing energy of the quartet as they bang out 17 minutes of pure madness. As for the track “Edmonton”, it’s the perfect conclusion to this rock tornado. It exudes an extremely violent energy – one minute and ten seconds alone is enough to ward off the bad luck that the current situation represents.