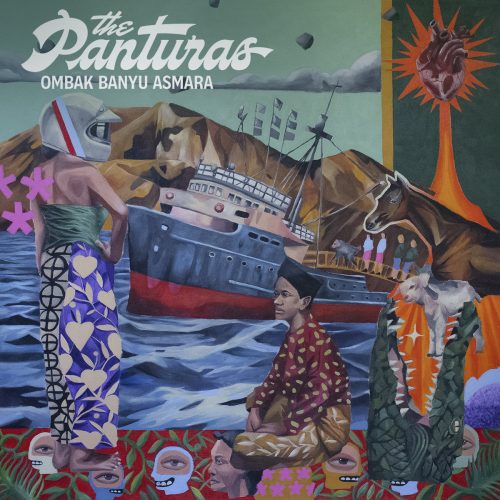 With raunchy, raspy vocals on half the tracks, and unexpected touches in their melodies and instrumentation (the Farfisa keys on “Menuju Palung Terdalam”, the accordion opening “Tafsir Mistik”), Bandung, Indonesia’s Panturas range well beyond the familiar parameters of surf rock, set in stone since the ’60s. This isn’t to say that they aren’t upfront about their debt to Dick Dale and The Ventures, as well as Indonesian surf pioneers Eka Sapta and The Tielman Brothers. The reverb is thick and splashy throughout, the tremolo picking appropriately caffeinated. The sonics on the notionally mellow instrumental “Intana” are gloriously chaotic and cavernous. That’s followed immediately, though, by the ludicrous “Masalembo”, a rockabilly bottle rocket that bursts into borderline industrial noise. The title track closes the album in grand style, it’s the strongest of the bunch and seems to say, sit tight, we’ll be back with more soon enough.