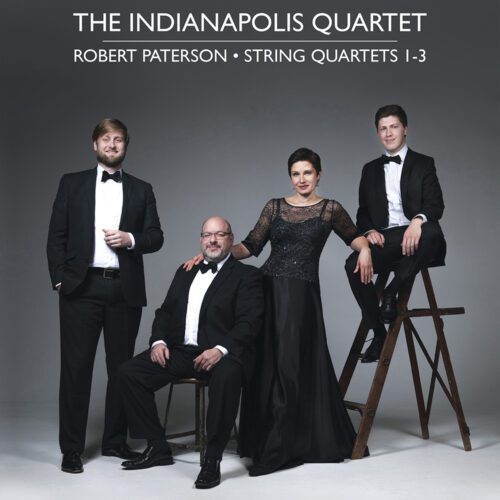 If, like me, you like contemporary music that is not afraid to please while being intellectually rigorous and stimulating, you will fall under the spell of the quartets (released on American Modern Recordings) of Robert Paterson, a composer born in Buffalo in 1970.

Propulsive rhythms, exciting play of colours and textures, playing with dissonance effects like so many spices to spice up a dish, but resolutely relying on a tonal centre to keep the listener hooked, Paterson’s sound universe brings together the best in contemporary music of the American school. Better still, he is not afraid to insert quotations from popular music, thus creating surprises with a very sympathetic humorous spring.

The appearance of the Love Boat theme at the end of the first quartet is highly amusing. It’s kitschy, but clever, because the famous cruise ship seems to be rocking under the guidance of a completely intoxicated Captain Stubing.

The second quartet is largely bathed in a wonderful film noir atmosphere, like Hitchcock. One is delighted to catch imaginary glimpses of scenes from Psycho or Rear Window. The neo-Hermannesque colours are further enhanced by Paterson’s own deviations: blues and a quotation from Grieg’s op. 25. We want more!

The third quartet is inspired by the voice. Or rather, different types of voices, whether literal or figurative. The voice of a ‘caller’ from a popular American southern auction, a ‘poetic’ voice, a voice distorted by the pedal effects of an electric guitar, or a solemn voice in the final movement, Anthem, in which appear, harmonically off-axis but entirely recognizable, joyful quotes from Eye of the Tiger and The Final Countdown.

This willingness to marry learned and popular culture is typical of a certain kind of contemporary American music. It is still largely snubbed on our side of the border, and that’s a shame. Such a fusion, if finally embraced by more Quebec composers, could do small miracles in terms of audience development. And it would not at all be a capitulation to the easy way out. On the contrary, the intellectual solidity of this approach is undeniable, but at the same time, it offers an extra soul made up of pleasure, humour, and a refusal of condescension. The ultra cerebral approach of much of our own contemporary scholarly music is entirely legitimate. But the little (if any) space given to other types of contemporary scholarly music (neo-tonalism, minimalism, post-minimalism, indie post-modernism, etc.) in our institutions of compositional education means that a large part of our creative music still seems stuck in a very Franco-French post-Boulézian aesthetic, which has little to do with the term “contemporary” since it has been around for more than 50 years now.

Don’t get me wrong, I deeply love this very demanding music, but there is room for something else too. And if you want to get an idea of what that something else is, at least a part of it (because the panorama of new music is gigantically varied), have a look at Robert Paterson. The worst that will happen is that you will have fun for about an hour.