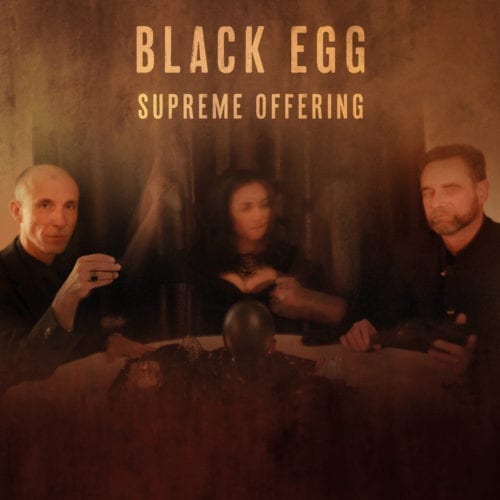 “In a time where rigour is just an economic concept, we affirm our desire, without concession, persistently, in the words of Coil, and obstinacy.” This group’s Little Manifesto does not go down without a fight. Pretending to the throne of Coil, a legendary group if ever there was one, is no small matter. You can feel their attraction to Coil’s “lunar music”, which characterized the band’s final period. Magick, a pillar of the esoteric doctrine developed by Aleister Crowley, is also a common reference. It fuses occultism, expression of desire, and discipline. Black Egg, guided by a thirst for the absolute and the perfect, perpetuates untimely traditions.

The vocalises, solar chants, and recitation of the vampish Ymaltzin subordinate the effusions, rales, and veiled or disillusioned cries of the male voices. The musical collective brings an impressive richness. Glitches, drones, samplings, guitar, bass, drums, percussion, and voices perform an assured and liberated orgiastic delirium. Note: Friedemann Kootz handled the mastering. He’s known for his collaboration with the gothic duo behind the remarkable projects Haus Arafna and November Növelet.

Through its repetitive and hypnotic pieces like mystical incantations, Black Egg invites us to a cosmic and carnal celebration.