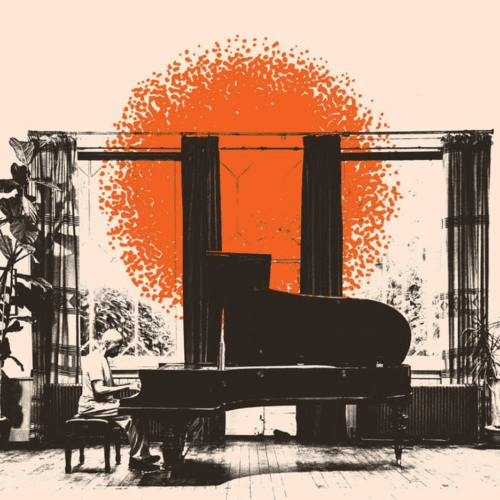 Music fans familiar with the name Laraaji already know this story, but for the benefit of others, we’ll tell it again. It was 1979. Our man was performing in Washington Park when a stranger, fascinated by the mysterious sounds he was coaxing from his zither, came up to him and offered to record an album with him. This man was Brian Eno. That’s how Ambient 3: Day of Radiance was created. Since then, the artist, always dressed in orange, has become one of the leading figures of the New Age movement.

Edward Larry Gordon had already been playing music for a long time at the moment of this providential meeting. As a young man, he had fun imitating his idols on a piano in the basement of the church he attended. He modelled his playing on that of Fats Domino, Little Richard, Jerry Lee Lewis, and even Montreal jazzman Oscar Peterson. It’s this period that Gordon, aka Laraaji, wanted to rediscover, recording Sun Piano in a Unitarian church in Brooklyn under the supervision of producer Jeff Zeigler (Kurt Vile, Mary Lattimore, The War on Drugs).

On the program: 11 pieces improvised by Laraaji at the time of the recording as well as a rereading of “Shenandoah”, a traditional American song. At first listen, one may find that this piano collection lacks a bit of personality. Indeed, the soul of the artist asserts itself with less originality than in his creations for zither, or his more electronic music. Then, little by little, these improvisations and their soothing warmth becomes lulling, a constant in the work of the man. In a few months, a sequel to this record entitled Moon Piano will arrive. It will then be interesting to compare the two sides of the work.