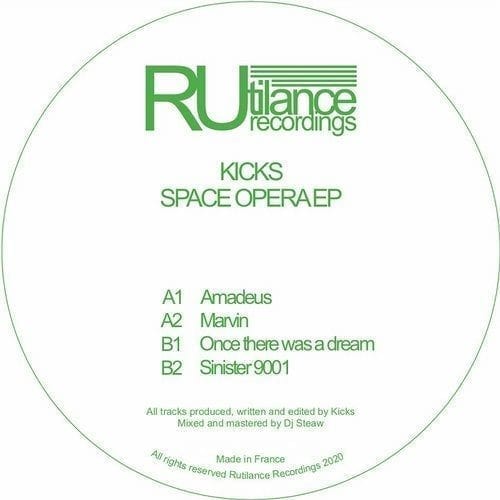 On the other side of the Atlantic, if the 1990s were the years of French Touch, the 2010s were the era of French deep house. Among the big players is Rutilance Recordings, a Rennes-based label run by the masters of the genre, Dj Steaw and Gunnter, who have also signed Montrealer Paolo Rocco. Today’s subject is Kicks (not to be confused with DJ-Kicks), a French producer who delivered the superb tech-house B-side “Pipeline” with Rutilance in 2015. The DJ returns with a four-sided EP that has the power to propel him to the top of the underground house scene. “Space Opera”, an homage to the science-fiction writer Pierre Bordage, doesn’t reveal itself as an epic with great pomp, but rather as an exploratory journey. Like an opera, the overture of “Amadeus” heralds colour: intergalactic sounds and refined textures. “Marvin” and “Once There Was a Dream’” unveil vivid reminiscences of 1990s house (the kick and the rhythm) and micro-house (the absurd sounds), a musical current particularly popular in some Eastern European countries. The reverberated vocal tracks are distilled with accuracy. The young Frenchman even allows himself to install a dub techno atmosphere with “Sinister 9001”, a window open on resolutely groovy and danceable soundscapes.