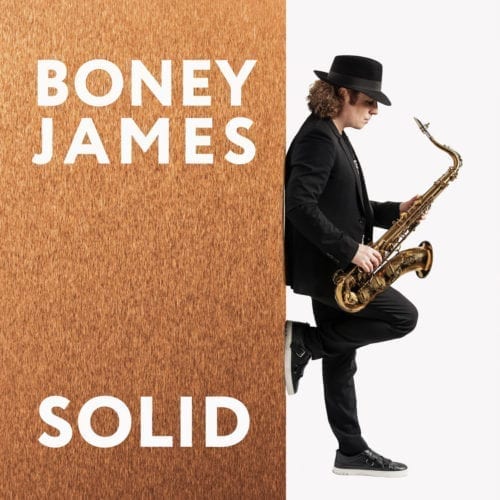 Ah! Smooth jazz… A brand name that has been smeared by many music critics, if ever there was one. Its practitioners are so used to whiter-than-whitewashing that one might wonder if the genre has any jazz present beyond name. Boney James is one of his most revered representatives. However, even though he now has 16 albums and several Grammy Award nominations under his belt, his name still gives purists a rash.

Let’s then try to make amends, to set aside all prejudices, and to comprehend Solid without preconceived ideas. Let’s face it, the task is difficult, even colossal. It’s all well and good to say that Jairus Mozee did a good production job, and that the album offers a beautiful variety of styles, but as soon as James puts his lips to his instrument, any goodwill is drowned in the waves of syrup that pour into the ears. Some moments are not unpleasant – “The Bottom Line” and its bluesy touch, for example – but weigh very little in the balance.

In Mr. James’ defence, what he’s presenting is a lot more digestible than what a certain Kenny G has been proposing for ages. His music is much less one-dimensional than that of the famous perm-primped saxophonist. His game is also a bit stronger, more emotional. Lovers of languorous sounds will certainly find something to their liking. Others can seek something a bit more… solid.