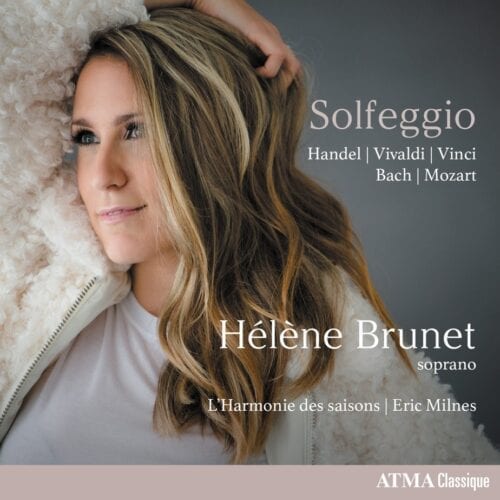 Soprano Hélène Brunet releases her debut album as a star soloist with Solfeggio, a bouquet of sparkling, mostly baroque tunes, on the ATMA label. She is energetically accompanied by the ensemble L’Harmonie des Saisons under the direction of Eric Milnes.

“Baroque music is the cousin of rock ’n’ roll and pop!”, Brunet exclaims.

You may have already heard this analogy between the genres, separated by about three centuries, and thought, “well, now, let’s not exaggerate”. And yet, if you listen carefully to the 13 pieces in Solfeggio’s programme, you’ll hear simple, catchy melodies and “radio-ready” works, usually three or four minutes long. Composers such as Handel, Vivaldi, and Vinci (no, not the genius who inspired films, another of the same name, born two centuries later and whose two tunes we hear here for the very first time) competed with each other in their efforts and daring to succeed and seduce the audiences of the time.

Brunet, whom I’d heard through her sporadic appearances on two other ATMA albums, is now proving to be a voice that counts in the Quebec and Canadian landscape of quality baroque singing. What I hear here is a very beautiful, velvety voice, as mellow in the luminous highs as those of a certain Karina Gauvin. That’s no small thing to say! I also hear the same kind of amber roundness in the middle register, which I’m sincerely thrilled about.