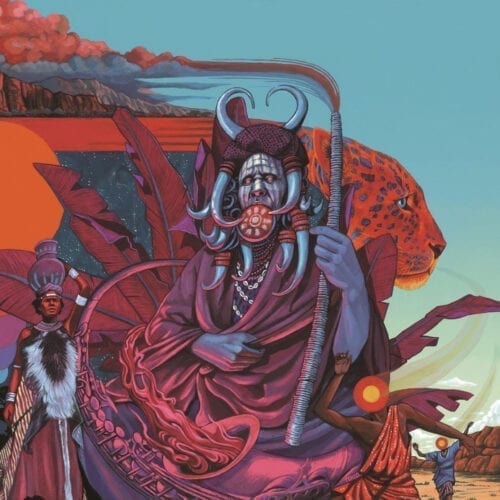 Chicago-born saxophonist Idris Ackamoor has been making a career for half a century. After studying with Cecil Taylor, he founded The Pyramids in the early ’70s before embarking on a seminal tour of Africa, during which the orchestra’s music and configuration were transformed. After The Pyramids split up towards the end of the same decade, Ackamoor re-formed the band a few times, whenever he felt like it.

Shaman! is the third Pyramids album released by British label Strut after We Be All Africans (2015) and An Angel Fell (2018). So we can talk about a revival of activity for Ackamoor, who’s picked things up exactly where he left off a few years ago. He continues to lead his caravan between the same dunes and the same musical currents: the more spiritual branch of the free jazz movement, West African music, funk, psychedelic rock, Ethio-jazz… Sun Ra, and especially Pharoah Sanders, come to mind when listening to the album.

However, one can’t accuse the cosmic rover of standing still. The music on Shaman! is so fervently performed that it’s anything but on autopilot. Ackamoor is a very gifted and versatile saxophonist whose range extends from the free flights of Sanders to the West Coast jazz of Ben Webster and Gerry Mulligan. His interaction with the flautist and violinist is delectable. The recited passages connect, and the grooves of the rhythm section and the electric guitar are irresistible. Music fans who think Kamasi Washington has something new to offer are advised to lend an ear!