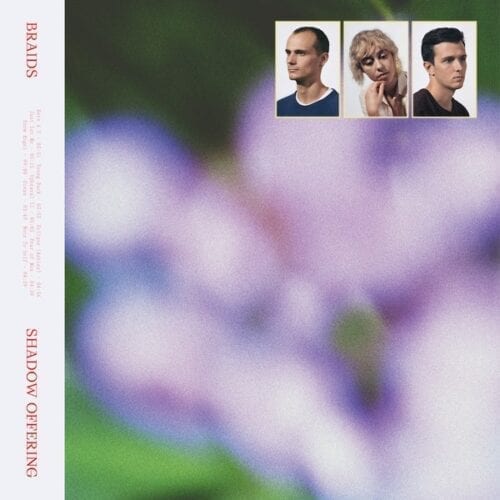 What happens when an art-rock band, prize-winning for its experimental properties, temporarily changes course and emphasizes songwriting concision? Will early fans abandon a ship that’s taking on new passengers for a more lucrative cruise? And if no one from anywhere on the spectrum of perceptions digs it, will the band risk shipwreck? That’s the challenge facing Braids, an excellent power trio originally from Calgary, formerly a quartet, and transplanted to Montreal a decade ago. The nine songs on the program of Shadow Offering, the band’s fourth album, are the result of a rigorous and sincere development, longer than expected. Thus, we are dealing here with real AABA-format songs, with intro, chorus, bridge, decorated with ornamental discoveries. The melodic hooks are inspired, the chord progressions solidly constructed, the vocal and instrumental interpretations straight to the point. Good work, without a doubt, from Raphaelle Standell-Preston (vocals and guitars), Taylor Smith (synths, bass, guitars, piano, organ), Austin Tufts (drums, percussion, piano), and co-producer Chris Walla. The innovative elements of this new batch are therefore more tenuous than before. Instead, the emphasis is on visceral interpretation, succinct playing, and getting “back to basics” as a sports coach would say. The future will tell whether Braids’ audience grows smoothly with this generalized accessibility and relative reduction of compositional risk in favour of proven stylistic references, which are dependent on the alternative pop-rock of the ’80s and ’90s.