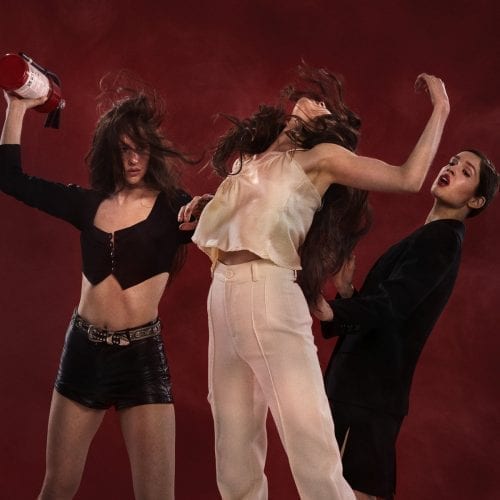 Clearly, Marie Davidson & L’ Œil nu have their work cut out for them, in deconstructing and rebuilding their vision of a brand image built in the clubs and festivals of the electro world, where they’ve been triumphant the past few years. Some people seem to be confused or completely stunned by Renegade Breakdown, a conceptual explosion from the Montrealer and her accomplices, towards French pop, Black American disco-funk, English electro-pop, German krautrock, Canterbury-school space-rock, jazz and more. Would it be hard to understand why the singer and her colleagues consciously evacuate most of the technoid and housy foundations from their previous propositions? For some, it seems obvious to admit (and to appreciate), while for others, perplexity or even disapproval can be observed. Yet isn’t pop, even the most audacious, the constitution of a stylistic cluster whose cement is none other than the singer-songwriter at the center of the project? In the case at hand, there’s also a second degree underlying the whole of Renegade Breakdown, perhaps imperceptible. It should also be remembered that several stylistic elements of this art-pop album were perfectly identifiable materials in the earlier works of Davidson, and in the tandem Essaie Pas that she forms with Pierre Guerineau, also involved in this project, as is multi-instrumentalist Asaël R. Robitaille. What’s more, the poetic exploitation of the themes of vulnerability, disenchantment, and inner misery creates an interesting contrast with this meta-pop that’s never entirely assembled according to the established rules. It’s difficult to predict the fate of this very interesting recording, whose message doesn’t go everywhere it should normally go. Nice card shuffling!