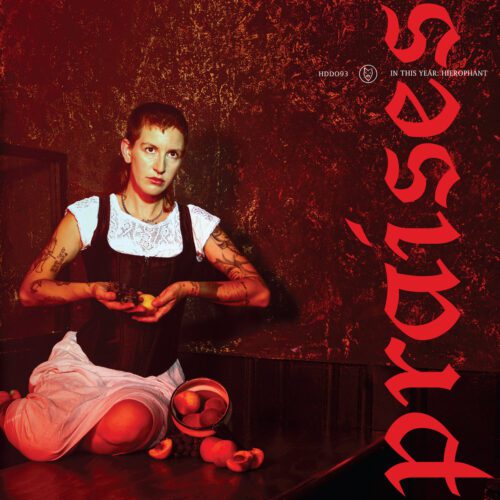 The Tarot could be described as ‘God’s picture book,’ or it could be likened to a celestial game of chess, The Trumps being the pieces to be moved according to the laws of their own order over a checkered board of the four elements. Yearly, musician Jesse Crowe draws a tarot card from a deck to help shape an album’s stories and characters within.

Whereas Jesse Crowe’s first Praises album—In This Year: Ten of Swords, found the singer solely responsible for writing and performing the songs and arrangements of the record (co-production credits going to their long-time Beliefs bandmate and collaborator, Josh Korody), the newest, In This Year: Hierophant sees Crowe return to a full band. The writing process for Hierophant is akin to a Bad Seeds record with key players contributing through feeling alone with little guidance and the sparse backing of a demo track. This distant songwriting process plays to Crowe’s strengths as a songwriter, producing a record that’s instinctively sombre, and gorgeously intimate.

Much like the Major Arcana, Hierophant, Crowe’s arrangements highlight the delicate, inspirational, and ever-persistent nature of their songwriting craft. In this Year: Hierophant is a record that’s both patient with the listener and commanding of reverence and evocation. Hierophant builds slowly through a quagmire of rich reverbs and the hypnotic cadences in Crowe’s voice sound hopeful amidst the decaying synth backdrops, and sparse instrumentation. Praises is not so much a side project of Beliefs co-front but an extension of a darker more hypnotic palette of the artist’s inner machinations. In This Year: Hierophant is a record that weighs the sorrows and joy over one’s lifetime acuminated; it’s a vulnerable record peppered with allegory and sincerity and the culmination of Crowe’s nocturnal ideation.