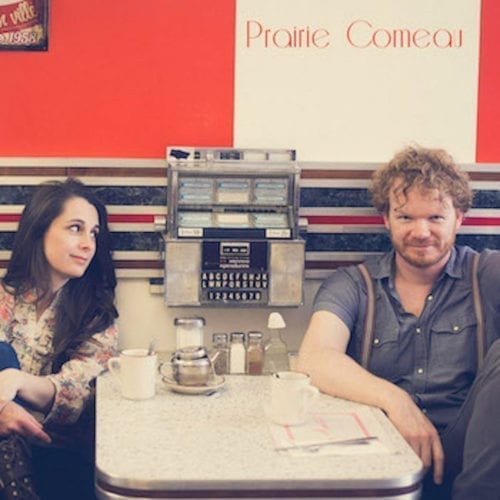 Some of these songs, although they were created more than half a century ago, still frequently resound in recitals, on certain TV channels, in soundtracks and elsewhere. They will certainly not be confused with the latest hits, but nor will they come off as obsolete quite yet. These tunes aren’t forgotten and what’s more, we’re generally happy to hear them again, which certifies their timelessness. Take “L’Auvergnat”, which is celebrating its 66th anniversary this year. No one would dream of calling this songwriting gem a relic, such is its beauty, such is its timeless purpose.

This Brassens fable is one of the eleven pieces that Anique Granger and Benoît Archambault, lovers in life and lovers of song, co-founders of the duo Prairie Comeau, decided to cover on this homonymous album. For those who, like yours truly, would not have grasped the pun, “Prairie Comeau” is derived from Perry Como, once an ultra-popular crooner. “Prairie” because of the origins of Anique Granger, Franco-Saskatchewanian (say it fast) by birth.

We already know her from her folk albums, as an accomplished singer-songwriter. Archambault is a keyboardist, trumpet player, accordionist, percussionist and chorister with Mes Aïeux, in addition to being a popular songwriter for children’s audio books.

Also featured in this collection are “Le ciel se marie avec la mer” by Jacques Blanchet, “Le temps des cerises” by Jean Baptiste Clément and Antoine Renard, “Notre sentier” by Félix, and “How Wild the Wind Blows” by Welsh poet Molly Drake (mother of cult rock star Nick Drake), “Speak Low” by Kurt Weil and Ogden Nash, “Lisandre” (traditional), “L’eau vive” by Guy Béart, “Singing the Blues” by Melvin Endsley, “Smoke Gets in Your Eyes” by Jerome Kern and Otto Harbach (popularized by The Platters), and, for those dreaming of the return of the Expos, “Take Me Out to the Ball Game” by Jack Norworth and Albert Von Tilzer.

Cover versions performed with taste and finesse by craftspersons who put their hearts into the transmission of the chansonnier heritage. Musicophiles who foresee a magnificent transposition on stage, in an intimate format, will of course have to be patient.