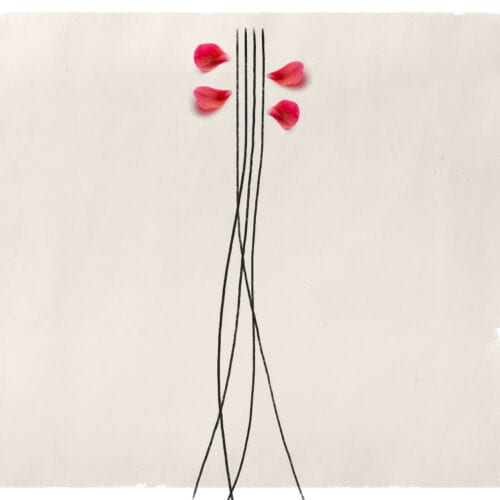 The well-disposed musicophile first perceives a vibrant Yerevan wind: it’s Armenia in harmonies for 16 strings, it’s the great Aznavourian’s “La Bohème”  transfigured by four quick-fingered chamber musicians. After a sequence of five of Charles’ songs sung with delicate bow strokes, Quatuor Rhapsodie dissects the science of the heart in a medley of popular romanticism from Marc Hamilton (the only Quebecer on the program), Mike Brant, Trenet, Montand, and Sardou.

The complicity of violist Nayiri Piloyan, violinists Amélie Lamontagne and Ana Drobac, and cellist Sophie Coderre dates back to the time when they climbed the slope leading to the Faculty of Music at University of Montreal. A fifth of a century later, their abundant road maps cover the four and a half kilometers separating Salle Claude-Champagne from the Maison symphonique. Quatuor Rhapsodie was born in 2007 out of a desire to sample the popular repertoire. The quartet has released three albums and given many concerts, including Pour un flirt, dedicated to the repertoire presently discussed. The love and nostalgia for these fifty-plus-year-old standards, shared by the audience and the four musicians alike, prompted them to create an album.

With the help of Mark Corwin, who directs the music program and teaches electroacoustics at Concordia University, Sophie, Ana, Amélie, and Nayiri recorded nine blocks of instrumental versions. In addition to the two mentioned above, there is a Delpech-Dutronc-Hardy-Aznavour, a Piaf, a Legrand, a Fugain, a Bécaud, a Dassin, and an Aznavour as an encore. We can’t calculate the harmonic potential of these works, but it must be said that the refinement of Nayiri Piloyan’s arrangements for string quartet – and Amélie Lamontagne’s for Fugain – further invalidates Gainsbourg’s assertion that song is only a minor art. A total of 77 well-packed minutes of chamber songs are offered to the musicophile.

A rhapsody in red, white, and blue, by a top quartet that knows that to get the party going, it’s better to bet on Delpech, Dutronc, Dassin, and Piaf than on Górecki, Glass, Reich, or Kurtág.