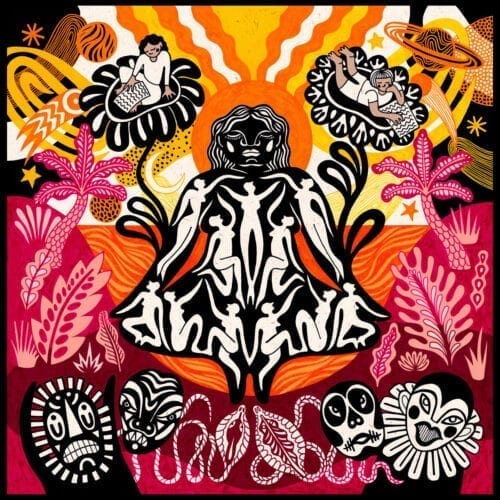 All hail the great Yazz Ahmed, who’s having a moment right now. At the end of October, the trumpetist, composer, and bandleader walked away from the 2020 Jazz FM Awards in London with not one but two chunks of transparent acrylic, for both U.K Jazz Act of the Year and Album of the Year. What earned her those trophies was the 2019 release Polyhymnia. While this reviewer still prefers its predecessor, the incredible La Saboteuse, Polyhymnia is nonetheless a stellar piece of work, successful in its ambitions (it was written, after all, for a large ensemble, not a loosely knit band). Named after the musical Greek divinity, it is, in Ahmed’s words, “a celebration of female courage, determination, and creativity” – originally a commission for International Women’s Day, each track in honour of a woman of consequence, politically or culturally.

The recent awards will hopefully draw more than a few new and sympathetic ears to Polyhymnia – and to this remix EP, her first self-released effort since her 2011 debut, Finding My Way Home. The four variations here put a fresh wind under the wings of Polyhymnia’s relatively sober and decorous music, while keeping Ahmed’s luxuriant sensibility intact. The first two tracks remix salutes to scholastic icons. “Ruby Bridges” namechecks the little girl at the eye of the American desegregation storm of 1960 (still alive and active today). Australia’s DJ Plead, a key name in the hard-drum sound, adds some punch to the tough but optimistic piece. “One Girl Among Many”, for Malala Yousafzai, is done up in a lovely and dramatic fashion by Indian-American producer Asmara. “Deeds Not Words”, which revisits an old suffragette anthem, gets a caffeinated jolt from New Zealand native Surly, no stranger to to blending jazz and juke – check out his Trip to Warsaw EP. Concluding the quartet of tracks in a more pacific manner is Ahmed’s own remix, with Noel Langley (her co-producer on Polyhymnia), of “Barbara”, her ode to venerable British saxophonist Barbara Thompson. It’s a more meditative take on the material, yet like the other three numbers, a sumptuous listen.