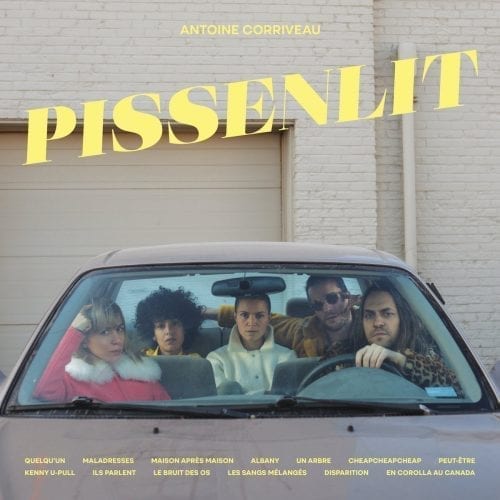 Quelqu’un  begins with an almost naked guitar, then the snare drums clap (five drummers hold the rhythm here concurrently, according to our sources, which include the singer-songwriter Salomé Leclerc). The amplifiers are heating up, and the power increases. Antoine Corriveau’s characteristic singing emerges, resonant words despite a slightly indolent phrasing, as if Antoine did not want to completely engage his chewing muscles, and a vocal grain that seems to be obtained by the hybridization of Daniel Lavoie and Arno.

This first song ends in a chaos of guitars, the musicophile feels projected into a piece by perhaps Elliott Sharp, one that could be entitled “Distortions, Discordances and Dissonances”. This apocalyptic finale illustrates the first of two noticeable changes on Pissenlit, Corriveau’s fourth full-length album: his music opens up to aggressive and incongruous chords, bold textures, sonic jolts, prepared piano and electronic discharges, on the brink of noise. It works well, even loud. Which brings us to the second change, which is a direct result of the first: the songs are more fluid than before, they vibrate. Except perhaps on “Peut-être”, a delicate and moving ballad. No sumptuous arrangements for violins and brass on Pissenlit, as on Cette chose qui cognait au creux de sa poitrine sans vouloir s’arrêter; there’s only a little saxophone left, in fact.

The lyrics of “Les sang mélangés” were written by Erika Angell – who sings them beautifully – and Corriveau, with, at the end, words inspired by Éric Plamondon’s novel Taqawan: En Amérique – on a tous le sang indien – Si ce n’est pas dans les veines – c’est sur les mains (“In America, we all have Indian blood / If it’s not in our veins, It’s on our hands”). Ironic, when we know that Antoine recorded this album at the Van Horne studio, which he created. Van Horne, as in the street named after Sir William Cornelius Van Horne, the railway magnate who helped crush the Métis revolt in 1885 and then used it to build his business. No one escapes history, as they say.