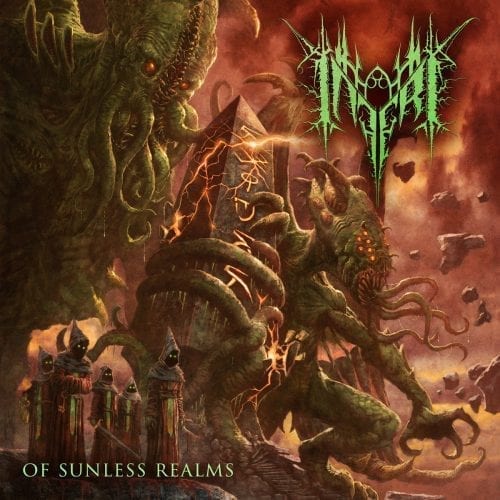 Very often, the name of a label is associated with a particular musical style. For example, Housecore Records, the label founded by Philip H. Anselmo, is associated with hardcore and grindcore, and Frontiers Music is synonymous with heavy metal, melodic metal and progressive rock. For its part, The Artisan Era (which released the most recent albums from Quebec bands Augury and First Signal) is the home of technical and progressive death metal bands, many of them with black and symphonic influences that hypnotize with their strings of notes and sinuous melodies. Inferi fits into this logic, which goes without saying since the label was co-founded by guitarist and singer Malcolm Pugh (A Loathing Requiem, ex-Entheos). The Nashville quintet’s surprise EP features five songs that give even more room to black metal, notably in the vocal harmonies of singer Stevie Boiser (Equipoise, Ashen Horde, Tethys) and Pugh. The piano at the beginning of “Eldritch Evolution”, on the instrumental “The Summoning”, and on “Aeons Torn” reinforces the symphonic side by giving an ethereal atmosphere to the melodies. Of Sunless Realms is a nice addition to Inferi’s discography, and will appeal to fans of The Black Dahlia Murder, Arsis and Enfold Darkness.