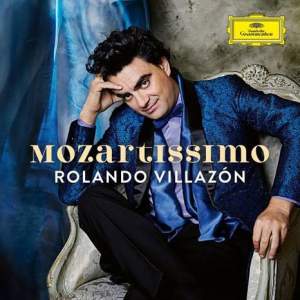 Mozartissimo: Best of Mozart features Mexican tenor Rolando Villazón in operatic productions performed by various orchestras, with a selection of some of the great tenor arias from Mozart’s most popular operas, including excerpts from Don Giovanni with the Mahler Chamber Orchestra conducted by Yannick Nézet-Séguin, Cosi Fan Tutte, The Abduction from the Seraglio, The Marriage of Figaro, The Clemency of Titus and The Magic Flute with the Chamber Orchestra of Europe, also conducted by Nézet-Séguin, as well as the arias for tenor and orchestra “Misero! O Sogno” and “Con Ossequio, con rispetto”, performed by the London Symphony Orchestra, conducted by Antonio Pappano.

The panorama of arias chosen can be as much a delight for the discerning music lover as it can be used to perfect knowledge of operatic repertoire for the initiated. Villazón’s performance is certainly worthy of note, as much for the precision of his expression in German and Italian as for his musicality and stage presence. Some pieces, such as “Papagena! Papagena! Papagena!”, allow us to easily imagine the singer’s theatrical abilities, while his very voice triggers a range of varied emotions, passing in the middle of the same aria from the seria to buffa operatic styles.

As far as orchestral accompaniment is concerned, one of the striking aspects here is the quality of the interpretation by the Chamber Orchestra of Europe, which is of a dazzling Mozartian style. It’s worth pointing out that this ensemble has long worked with conductor Nikolaus Harnoncourt, an advocate of historically informed performance who considers the instrumental techniques of Mozart’s time (or of any other composer of music considered older), and a different understanding of the works of earlier periods. The precision of Nézet-Séguin’s conducting, combined with the WCC’s experience in historical performance and the tenor’s vocal fluency, results in music that is sparkling and full of character.