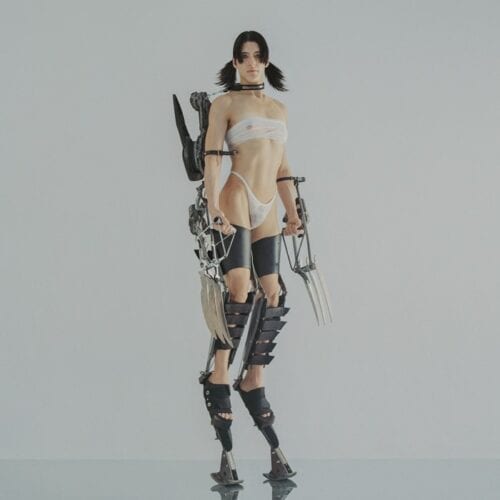 Since Björk, FKA Twigs and other pre-pop stars have called on her immense production talent, transgender artist Alejandra Ghersi has proved to be one of the great revelations of electronic music. One can swoon over Arca’s world, over her explosive proposals, rhythmic refinement by way of the latest technologies, magnificent superimpositions of synthetic textures, and very tender moments. Prone to violent disturbances, her sonic discourse does not exclude grace, voluptuousness, or unconcealed vulnerability. Thus, over the course of four albums including the one in question here, one could sense Alejandra’s intimate struggles, observe the progressive assumption of a multi-gendered identity – Arca defines herself as both female and gay, given her sexual preference for men. Of Venezuelan origin, raised partly in the USA, now living in Barcelona after a stay in the U.K., she now presents KiCk i, certainly the most pop of her recordings, well outside the expectations of an audience accustomed to her more radical music. She subtly recycles the frenetic sequences that are her secret reciper; her electroacoustic explosions become the ornaments of a more welcoming work. Thus, her previous discoveries contribute to magnifying authentic melodic hooks and more pop constructions, even reggaeton. The songs are sung in Spanish and English, with prestigious guests such as Björk, Rosalia, Sophie, and Shygirl, making notable appearances in turn. By completing this transition of identity, spectacular to say the least, as clearly illustrated by the cover of KiCk i and “Nonbinary”, the first song on the program, could Arca finally return to her “natural” territory, with one foot in creative pop and the other in deep digs into electronic music? It’s better not to answer this question, and let time reveal what comes next.