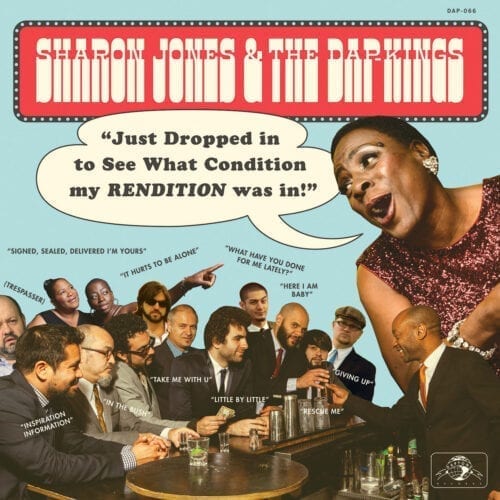 All respect is due to Antibalas, The Budos Band, and all the others on the labels Desco and then Daptone. The beating heart of the boisterous Brooklyn funk revival that exploded around the turn of the millennium, however, was Sharon Jones & The Dap-Kings. A perfect recreation of the classic ’60s soul revue, it paired up the band that backed Amy Winehouse on Back to Black with a full-time frontwoman who’d previously been both a corrections officer and wedding singer – a commanding yet convivial presence, with powerhouse pipes to boot. The bond held for 20 musically amazing years, two decades that saw eight albums, a Grammy nomination, and countless collaborations including Michael Bublé, Phish, and David Byrne – until Jones’ passing from pancreatic cancer in 2016.

Though the band delivered killer originals, they earned a reputation for punchy cover versions, cooked up for soundtracks, advertisements, tribute projects, or just for the hell of it. Their earliest calling card, after all, was a surprising take on Janet Jackson’s “What Have You Done For Me Lately?” It’s included here, as is “Take Me With U”, from Prince’s Purple Rain. These two iconic ’80s soul-pop tracks are about the most dramatically altered of the dozen on this retrospective compilation – a lucky 13 in the digital format, with a startling revision of Woody Guthrie’s folk anthem “This Land Is Your Land”. The old-school soul numbers, like Aretha Franklin’s “Rescue Me” and the young Stevie Wonder’s “Signed, Sealed, Delivered I’m Yours”, arrive unadulterated, while others still are given just the right bit of the outfit’s own twist. They strip off the glitz and toughen up Musique’s mid-’70s disco essential “In the Bush”, and feed a jolt of electricity to “Just Dropped In (To See What Condition My Condition Was In)”, the Kenny Rogers oddity familiar to fans of The Big Lebowski.

Consider this an album of other people’s greatest hits, if you like, but be assured that it’s a solid-gold soul session from end to end, with rave-ups, shakedowns, and a couple of easy jams to catch one’s breath. It’s also one more opportunity to remember Jones, a latter-day queen of soul music.