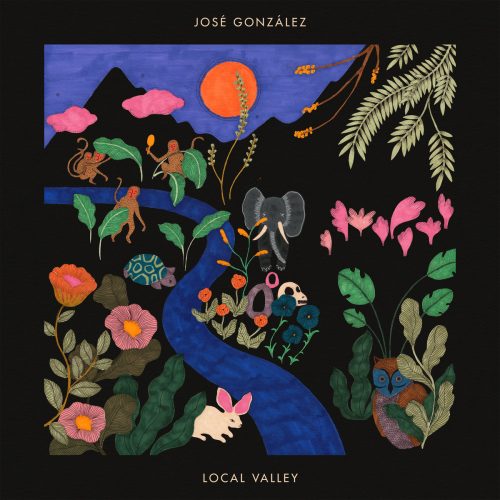 If there was a quote to summarize the existential wonderment of José González’s fourth studio album, Local Valley, it would be English poet William Blake’s, “If the doors of perception were cleansed everything would appear to man as it is, infinite.”  The quote references the endless possibilities that we as human beings and as a society can achieve and sometimes get lost in. For José González, a songwriter that dabbles between different schools of thought between each release, this is the “local valley”—the very point we as humans are experiencing right now, or eons ago. There is a chasm somewhere in the beyond to which González retreats, and brings back songs that chronicle generations in four short minutes.

The first collection of songs from the Swedish/Argentinian singer-songwriter in five years is at its heart about universal humanism, and uses González’s gentle cadence, classical indie acoustic guitar (which has been compared to Nick Drake), and the odd simplistic, sampled drumbeat, to provide a relaxing and tranquil odyssey of sound. It’s an album you throw on while a candle burns from beginning to end in the background, and while the wax is slowly consumed, you begin to think everything might be okay. It’s a breath of sweet relief during this tumultuous time where every release of art is about humanity grappling with a world pandemic.

It’s near impossible to listen to González’s music and not pick out the poetic weaving of phrases like “Visions, imagining the worlds that could be / cycles of growth and decay, patiently inching away to unreachable utopias.” He comes across as a language savant and admirer—in all three of his languages, Swedish, English, and Spanish—but never in a pretentious way. There are a few tracks geared more to dancing than to philosophical teachings, like “Head On” and “Swing,” but where Local Valley shines is in taking complex ideas about life and summarizing them in blissful metaphors. Yes, González, whether he knows it or not, is a master of magical realism.