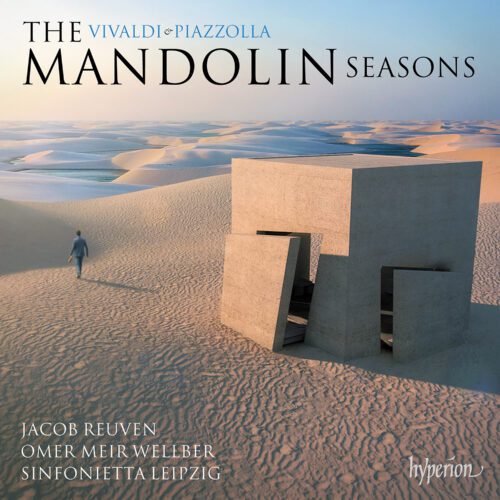 This is not the first time that these two cycles of Seasons have appeared on the same album. It has even become a classic in itself. That said, this is the first time that they have exchanged such idiomatic tones, and this in arrangements that are both original and entirely appropriate. In addition to the basic chamber orchestra, which remains fairly the same, two soloists, as different as they are complementary and above all typical of their respective cultural universes, take centre stage: the mandolin and the accordion (why not the bandoneon?).

The exchange of seasons (we go from Vivaldi’s winter to Piazzolla’s, then back to the Italian’s spring, and so on) acutely reveals the musical kudos to his elder that the Argentinean has integrated throughout his own seasons.

The accordion-mandolin duet, beautifully supported by the Sinfonietta Leipzig, breathes an air of freshness into the whole, no matter what climate is suggested. The tempos are dynamic without exaggeration, but the pure, clear lines of Reuven’s mandolin, and the rustic but elegant breath of Wellber’s accordion, bring a cascade of sparkle and even terroir that smacks of the dark, generous lands of Italy or Argentina.

I have returned to it many times and I believe you will too. A record to be savoured in any season, with a glass of bubbles in hand.