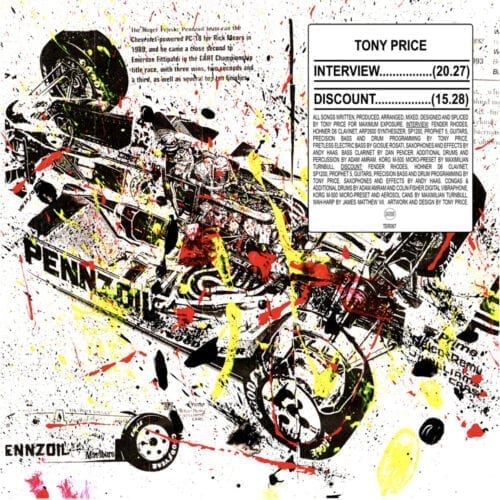 In 1972, Miles Davis released On the Corner, a radical record on which the trumpeter’s music revealed new influences: the funk of Sly & the Family Stone, the free jazz of Ornette Coleman, and the electroacoustic music of Karlheinz Stockhausen. Davis and his sidekick, producer Teo Macero, offered unusual sound collages based on repetitive rhythmic loops. At the time, the reviews were devastating, but there was a lot of water under the bridge and that precursory album has borne progeny.

The two pieces that make up Toronto musician Tony Price’s Interview / Discount are among the offspring. However, it would be simplistic to consider them duplicates of Davis’ album. Closer to the avant-garde, Price has seasoned his ratatouille with stronger spices. The fragments of musique concrète sprinkled here and there are much rougher. The interventions of Andy Haas and Dan Pencer, on saxophone and clarinet respectively, draw more from free jazz and sketch out crazier lines. There are also touches of noise and dub. The Clavinet used on “Discount” is even reminiscent of Stevie Wonder’s swaying funk.

Although founded on minimalist and repetitive rhythms, these two long tracks are full of surprises. Like the city of New York, where Price has been living for some time, they’re teeming with life. One can sense that the musician took a malicious pleasure in triturating the sound material, in arranging elements from multiple sources. This pleasure is contagious because, even if it involves ideas from avant-garde circles, Interview / Discount is a playful work that makes you want to move your hips.