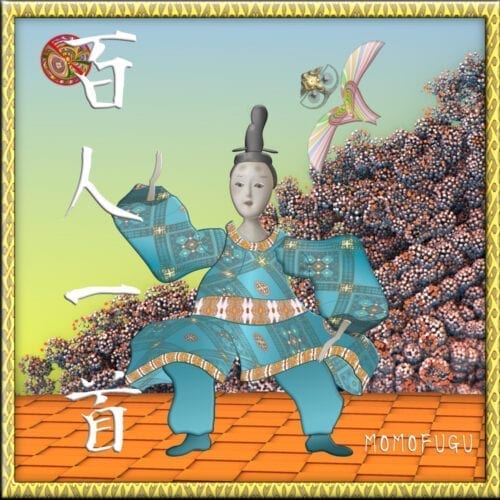 The Ogura Hyakunin Isshu is an anthology of 100 waka – precise short-form poems, something like haiku – by 100 poets, complied about 800 years ago at the dawn of the age of the samurai. It remains a recognized title in Japanese classical literature, in no small part because of the continuing popularity of the card game uta-garuta, which uses the book as the basis for its 100-card deck.

Nine of those cards are quoted by way of Vocaloid, the synthetic voice app, on this curious creation from enigmatic producer Momofugu, irreverent and stylistically promiscuous in the manner proper to Japanese pop. The first track, “The Monk Sosei”, sits at the halfway point between Germany’s Kraftwerk and Japan’s own Yellow Magic Orchestra. What follows seems like a household robot’s algorithmic approximation of tropical dance-pop (“Sarumaru” and “Semimaru”, the latter featuring a bit of bonus guitar evocative of seagulls at sunset, if you like that sort of thing). Then come similarly odd variants on hi-NRG Eurodisco (“Taira no Kanemori”), coarse blues-rock (“Ono no Takamura”), and ’80s cop-show electrofunk (“Abe no Nakamaro”). Beyond that, there are a couple of really memorable bits of inventive, leftfield pop-craft here, “Emperor Koko” and the disorienting “Otomo no Yakamochi”. You’ve snatched up the right cards, Momofugu-san.