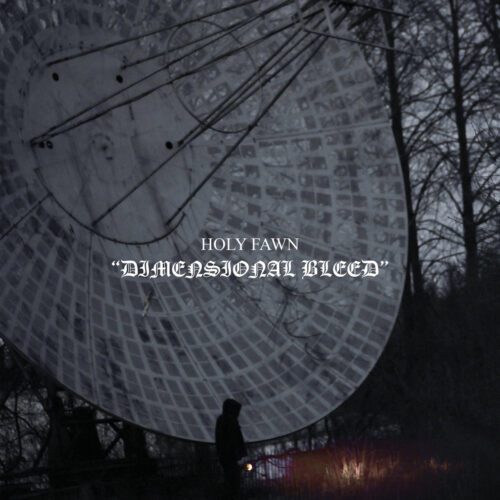 When HOLY FAWN, a four-piece experimental shoegaze/post-rock group from Arizona, burst onto the scene a few months after the pandemic debuted in 2018, their band bio was (and still is) “four creatures making loud heavy pretty noises.” Though that’s one of the best band bios I’ve read for this kind of genre, with their latest effort, the sophomore album, Dimensional Bleed, HOLY FAWN is no longer four guys making noise, but four guys who understand how to grip their listeners in tightened and darkened atmospheres that stay with you hours after listening.

The first album, DEATH SPELLS was good and heavy, stringing the line of the kind of blackgaze made by Deafheaven in their prime (a band HOLY FAWN actually opened for) but there was nothing really separating HOLY FAWN from their peers. Still, it made this band explode through word of mouth. ‘Oh you like Thrice and Nothing? Check out HOLY FAWN.’ Not that there ever needed to be something separating the group. Variation has always been taken with a grain of salt in the post-rock/shoegaze genres and any band that goes too hard on exploration sometimes loses their diehard fans. Perhaps Deafheaven is a perfect example of that.

With Dimensional Bleed, however, HOLY FAWN has made an introspective and lucidly heavy album that utilizes synth work, vocal echoes, and found sounds to make the truly exhilarating metal passages (screams, busting drum toms, and walls of distorted guitars) hit all the sweeter. The eponymous “Dimensional Bleed” is a perfect example, with the intro resembling something like Explosions in the Sky and then descending into an evil, gargantuan outro. “Sightless,” the longest track on the album, also builds and builds into a thorough release of noise and emotion. The detuned piano to finish it really leaves you in a strange euphoria to open “Void of Light,” which sounds like a spaceship blasting off into the ether.

It seems HOLY FAWN has become architects at creating these constructs of bright instrumentation and then driving them into lightless pits or voids. And the production behind this album is made for discovery. After the second listen, certain sounds will appear that were once hidden. Yes, Dimensional Bleed is required reading for lovers of the morose but sonically beautiful world of post-rock/metal.