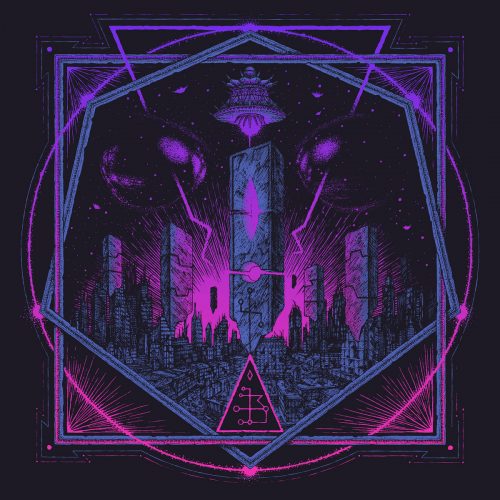 Is America’s dream factory in flames? It’s a question once asked of the hometown of Emeric Levardon, the Parisian mastermind behind the monumental kitsch of Hollywood Burns. His First Contact EP of 2016 introduced the world to his sinister, cinematic synthwave, but it was the first album, 2018’s Invaders, that truly revealed the bewildering scale of the thing. If Hollywood is indeed burning, a glorious conflagration of combusting cellulose nitrate wreathed in smoke speckled with flakes of silver halide, the cataclysmic spectacle finds its auditory dimension in Levardon’s music. The Age of the Saucers is again an evocation of the sheer power a film score can wield, drawing on decades of inspiration–the art deco covers of the two Hollywood Burns albums confirm a classical foundation, and a penchant for the motion-picture medium’s fantastical, illusory possibilities. This, Levardon supplements and fortifies with ample doses of pompous power disco, unholy hair metal and snarling electro-punk. It’s a formula for music of extreme force and relentless momentum, necessitating breathers such as the 90-second “Moment of Bliss”. And as soundtrack music, it’s an instrumental affair—aside from the eerily insistent robotic refrain of the Daft Punkian “Saturday Night Screamer”, the only track with vocals is the penultimate track “Skylords”, an addition of questionable merit.