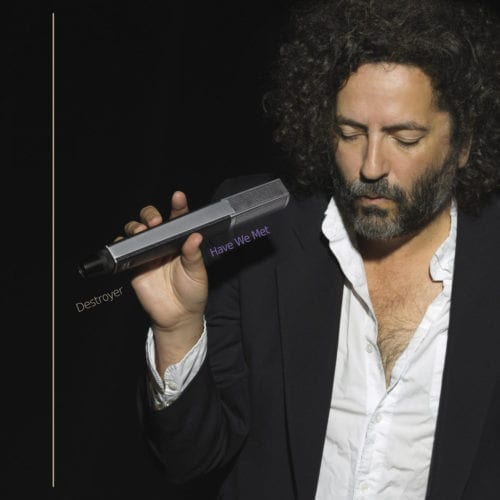 The unpredictable and captivating Dan Bejar, leader of the band, surprises yet again on Destroyer’s 13th album, Have We Met. In a very nice way, by the way. The 10 songs on this opus, produced by John Collins (he also took care of the bass, synthesizers, and programming) are of a tasty, controlled casualness. As my colleague Patrick Baillargeon expressed it, Bejar has not abandoned the theatrical tone that has always characterized him, nor his Bowiesque side. You can appreciate these aspects on the pretty track that opens the record, “Crimson Tide”, or on “Cue Synthesizer”. Less sinister or gothic than his three previous records (Kaputt, Poison Season and Ken), Have We Met is a nice mix of sensitive and cerebral music: the rich synth atmospheres mix with clever guitar arrangements (performed by Bejar”s other accomplice, Nicolas Bragg) and an obedient bass, without forgetting the sensual and assertive voice of the 40-year-old from Vancouver. The album even presents a few cheerful tunes, like the superb “It Just Doesn’t Happen”. Relatively accessible, Destroyer’s recent work (according to Bejar) was inspired by Leonard Cohen’s last records, soundtracks such as Pretty In Pink and White Nights, as well as… 1980s hip hop. Go figure! Never mind, the world of grey on grey, dappled with dashes of sunlight, created by the band is entirely successful and inspiring. This time, there’s nothing stifling or cynical. The lyrics of the singer-songwriter are sometimes sibylline, but the offering is much more inviting than the previous ones. Finally, many who are recalcitrant before Destroyer’s music will be able to get with it without too much apprehension. Bejar’s destruction here is exciting, even sensible and seductive. Collins was looking for a cool sound for Destroyer… and he found it.