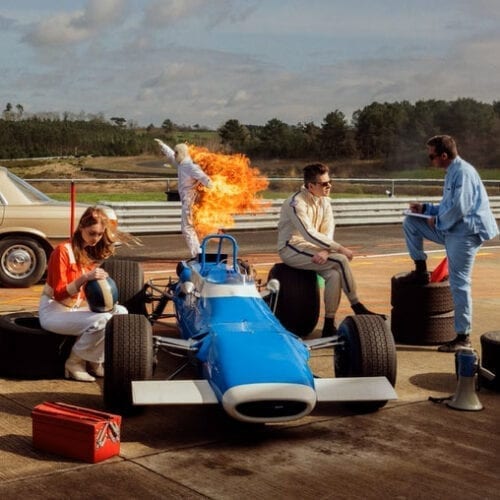 The Buenos Aires cycle (the Palermo Hollywood and Volver albums) well behind him, here comes the crooner in a convertible, with Keren Ann, Chiara Mastroianni, and Anaïs Demoustier in the back seat. Packed with tracks such as “Ma route”, “Comme une voiture volée”, “Virtual Safety Car”, “La roue tourne”, “Interlagos (saudade)” and even “Grand prix”, Benjamin Biolay’s ninth album is a road trip in the figurative, yet almost literal, sense. Car racing was the poetic point of departure, and the first song was written shortly after the accident of the driver Jules Bianchi at the Japanese Grand Prix in 2014, which he succumbed to nine months later. John Frankenheimer’s 1966 film Grand Prix would also have been a source of inspiration for this album with its multiple accelerations, braking, sharp turns, skids, drifts, and contemplative sequences at the controls of the metaphorical car. Predictable from the outset, this theme could have been a string of trite clichés… but it’s far from that. It’s about the sacrificial consequences of stardom, leading its famous protagonists to personal lives that are certainly enviable in the eyes of their fans, but also seriously risky in their impulsive actions and chaotic journeys that last until the break of dawn. Also of note are the wise reflections on the collapse of certainties over the course of one’s existence, as well as the depth of the songwriting from end to end of the exercise. Rather rock on the whole, Grand Prix does the circuit of krautrock, post-punk, and Britpop, and also electro-pop, disco-funk with a touch of jazz, Gainsbourgian pop and musica popular brasileira. Guitars, synthesizers, bass, percussion, string sections, choirs, and other instrumental complements serve the dark, seductive voice and chiselled verbs of Biolay, an eclectic composer, refined and sensual arranger, and brilliant producer. Once again, some excellent French pop, served Biolay-style.