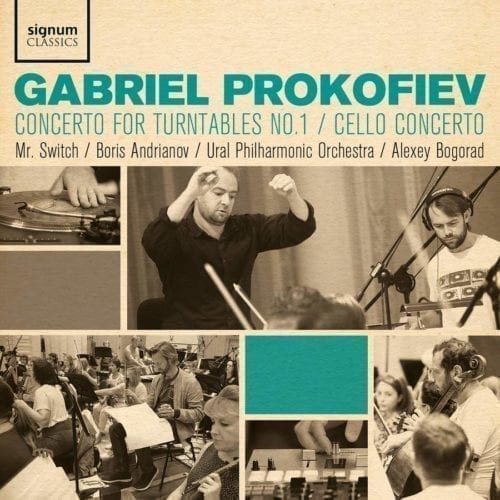 There are already a few composers who have brought turntables to the symphony orchestra. Gabriel Prokofiev (yes, yes, Sergei’s grandson) is a composer and DJ, but it is not for himself that he composed this concerto in 2006, a commission that he began by refusing, moreover, fearing that the project was only a silly way of “rejuvenating the image of the orchestra”. Fortunately, his sponsor managed to convince him, because this piece is worth the detour. The soloist, Mr. Switch (Anthony Culverwell), is a true turntable virtuoso (a four-time world champion!), and uses all the tricks in the book throughout the five movements of the concerto. Prokofiev’s writing is very textured, with important place afforded the percussion, pizzicato in profusion and, of course, the sound universe of the turntable, which multiplies the possibilities of the orchestra tenfold. The composer proves in his program notes that he knows the history of this instrument, and that his piece is not in fact just a demonstration aimed at attracting young people to the concert hall. His concerto has already been played nearly 60 times all over the world, with the same soloist. The Cello Concerto was commissioned for a premiere in 2014 at the St. Petersburg Philharmonic, and the composer, who was born in London, is letting his roots speak a little louder than usual, resulting in a work with a more “traditional” style (which certainly doesn’t mean without interest). The soloist Boris Andrianov’s playing is not overly prominent, but on the contrary, he often mingles with an orchestral mass whose textures vary its reflections. A very good record.