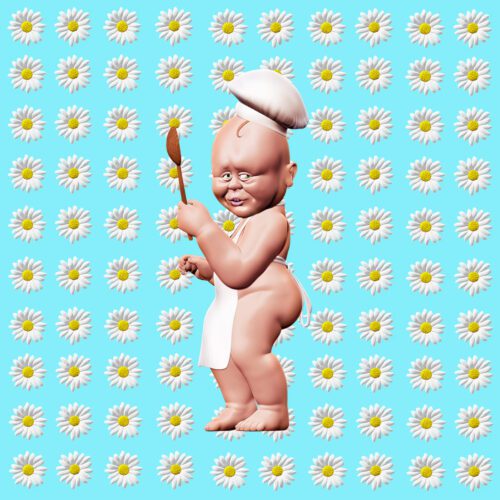 The other day I caught an episode of one of my favourite shows that I’d seen at least a dozen times since it went off the air over a decade ago. It still holds up. It endures, and each time I watch it, I discover something new. With each viewing, another layer, another level comes into focus. What started as a clever drama, eventually showed itself to be a great comedy. From each revisit, hidden references and meaningful lines, that were there all along, emerged. Good writing, and good art, do not reveal themselves all at once.

Fresh Pepper is like this. The self-titled debut album of a Toronto-based group made up of Joseph Shabason, Andre Ethier, Robin Dann, and Felicity Williams—featuring members of The Weather Station, Beverly Glenn-Copeland, and Dan Bejar (Destroyer)—is enjoyably perplexing.

Is this an album about working in kitchens and restaurants? An inside joke for the industry, with its weird cover art (a digital naked baby, in an apron and chef’s hat, standing in front of a background of daisies). Is it meant to be funny? Satire? I asked myself, these questions as the vocals came in like a Barry White impression. Is he singing a love song to rice porridge? Then, continuing the theme, there’s, “Walkin,’”  “Prep Cook in the Weeds,” and “Waiting On.” The background chatter heard in “Seahorse  Tranquilizer,” —with the refrain—”every table a candle“—took me out of the kitchen and onto the floor of a restaurant on a busy Friday night.  After this, I was in.

I heard the synthesized sounds of “Dishpit,” a song that transported me to that dank corner of the kitchen, with the steam pluming out of the washer; the sound of water jets, and pumping machinery,  working on those dirty dishes. If I closed my eyes, I bet I could hear a cook yelling in the background.  Ha! Yes! Amazing! But would this work as well on anyone not familiar with that racket?

Finally comes “The Worm.” A great end to the record that left me wanting more—as any good restaurant experience should. But for this Freelance Music writer/Bartender, it brought it home in a more personal way. For me, “The Worm,” captures the feeling at the end of a grueling shift at the restaurant. That moment of finally sitting down for the first time in 12 hours, with a cold drink in front of you, as you unwind and let out a sigh; not speaking to anyone, or having anyone speak to you, for at least 15  minutes.

I don’t know if another restaurant industry concept album exists. But if it does, I haven’t heard it. At least not like this.

The first time through, I thought Fresh Pepper was hilarious. A comedy album. But then, on second listening, I began to appreciate the musical performances on the record. The horn arrangements, the percussion, the vocal harmonies. There were more layers and levels to it all. Much more to appreciate.  And now I wonder what my third listen might glean? When I revisit this album months or years from now, will it take on a new tone? How will it blend with what’s happening in my life then? Will I smile upon hearing a previously dismissed lyric? Will I be impressed with a piano melody that I may have overlooked?

Good albums, good bars, good restaurants, and good TV shows have a lot in common. Once you’ve had a great experience with them, you immediately begin to think of the people you know that would also appreciate them. So here I am telling you, dear music fan or Industry worker, to check out Fresh Pepper. And then visit it again, down the road. Introduce it to some friends. Because good writing, and good art, do not reveal all of themselves all at once.