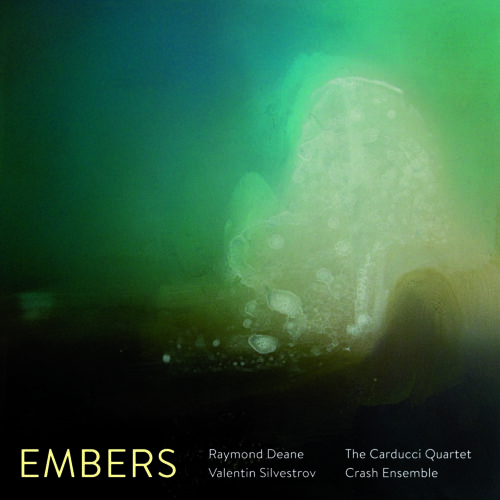 Here is a program of great coherence. All three pieces, two from Ireland-born Raymond Deane and one from ukrainian Velentin Silvestrov, bathe the listener in the same sound world, one that seems to slowly breathe in and out hypnotising sighs made of pure sound with fragments of melodies, as if they were the musical-physical embodiment of an entity originally made of pure melancholia. Crescendos and decrescendos follow each others, amplify and fade out, elsewhere they seem to disintegrate slowly, before resuscitating, like a cycle of infinite Big Bangs and Big Crunches.

Deane’s Marthiya, for violin, viola and cello (three members of the Crash Ensemble) doesn’t pretend to have a programmatic nature, but it nevertheless has an acknowledged debt to the Middle-East. Marthiya is a term associated with an ancient persian and arabic poetic form. Deane treats it with a recurring and motivic harmonic progression, a kind of mantra I’d say, that also refers to specific characteristics of semitic languages. An atmosphere of darkness, should I say funeral-like, that permeates the work, and inspired by the horrible devastation that has befallen on Irak since the 2003 war, completes the link to the middle-eastern thematic, in Deane’s own description.

Deane’s string quartet, titled Embers, dates back to 1973, but you wouldn’t notice the passage of time between this and the previous piece (from 2005). Both claim a remarkable coherence in the Irish composer’s musical dialectic. That being said, Embers is more easily approachable than Marthiya. A touching and limpidly constructed melody serves as an anchor throughout the work. Or almost, should I say, because Deane, as the piece evolves, deconstructs it and makes it disappear, slowly replacing it by another musical reality. Embers is an homage to a Samuel Beckett radio play, of the same title. Memories, dreams, almost forgotten impressions of past life defining moments that fade away in one’s mind, like degrading Polaroid images, almost totally gone, but briefly reanimated and revivified, like embers one tries to maintain alive, that’s Embers. Beckett’s and Deane’s. Annihilation is inevitable, but the fight for life is in itself a small victory.

Silvestrov is a quasi-superstar of contemporary music. His sound world marries in a unique way some aspects of the american minimalist school (repetition) with a harmonic personality veiring on the grey-ish, oscillating between modern chromaticism and melancholic tonality, all in all creating a sense of pervading fogginess and an ambiguity that feels like a continuously unresolved dream. His is a music accessible and demanding at the same time. Whatever the description, he has become a favourite of new music geeks and enthusiasts, which I am an avid example! String Quartet no 3 was originally commissioned for the Kronos Quartet, via the help of Louth Contemporary Music Society (a label I didn’t know about until recently, shame on me!!). So let’s give them a great heartfelt thank you because this is a great piece. It has all the Silvestrov tricks of the trade that we like, but with an apparent maturity that keeps on getting better, like an exceptional wine. The composer says he has put some Irish-like melodic bits and impressions here and there. Well, I think they are more than bits and fragments. Between Silvestrov-y typical ghostly sighs and sound breaths appear romantic but sorrowful melodies that will haunt you and bring tears in your eyes. It is rainy day beauty, full of something French call spleen, or Portuguese saudade. It almost hurts, but you keep wanting more of it! This cat and mouse game between two musical poles is a Silvestrov trait, but here it is supremely expressed and controlled, and it nourishes the expecting music-lover ears and spirit.

Sound is excellent, and the Carduccis and Crash Ensemble (well three of them in Marthiya) create wonderfully purring bass sounds, contrasted by luminous points and scintillating lines where needs be.

Superb release from a label we here on our side of the big lake wish to know a lot more soon.