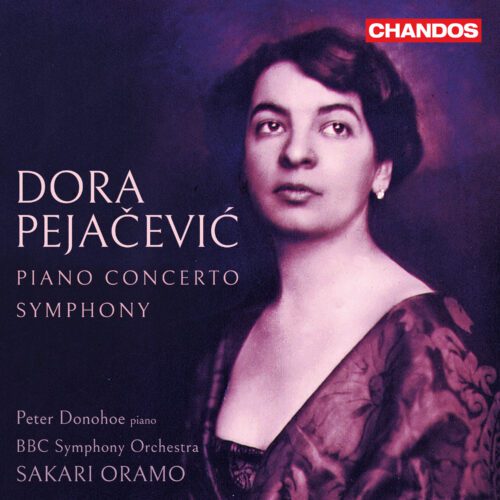 Not only is Dora Pejacevic a rare Romantic composer who had the opportunity to write large orchestral works, but she is also a rare example of classical music from Croatia! That said, you will look in vain, at least in the two works on the program, for melodic or stylistic references associated with that country. Pejacevic’s music is more of the Germanic school.

Her Piano Concerto op. 33 in G minor, the first one written by a Croatian, shows its epic character from the first minutes. One thinks of Grieg, for the dramatic impetus, but one notices through the grandiose framework delicate, chamber-like and almost impressionistic coloristic effects. It is splendid, even if it lacks only the melodic spark that would make it the equal of a Tchaikovsky or a Brahms. The Symphony Op. 41 in F sharp minor is also imbued with several solid influences, such as those Straussian bombast that one recognizes in a certain instrumental gesture rather than in the sustaining harmony. Elsewhere, one appreciates the evocative panoramas of Ropartz or Pierné. But don’t be fooled: Pejacevic’s music is not a pale copy in the form of a mishmash. The above-mentioned references are skillfully and intelligently integrated into a brilliant, refined, pleasantly expressive and intellectually superior discourse.

The rediscovery of this composer (who was born a countess but became hostile to the aristocracy over time) may not revolutionize our understanding of early 20th century music, romantic, post-romantic, impressionist, etc., but it will certainly alter the family portrait of that era. A woman among many men, she is not the only one, it is true (we have rediscovered several others in recent years), but she certainly appears to be one of the most imposing in terms of character and expressive force. More so than many men already bettràer known.

Peter Donohoe plays this music as if he had always done it, and the BBC Symphony under the direction of Sakari Oramo is like a firework display of textures and hues. We want more.