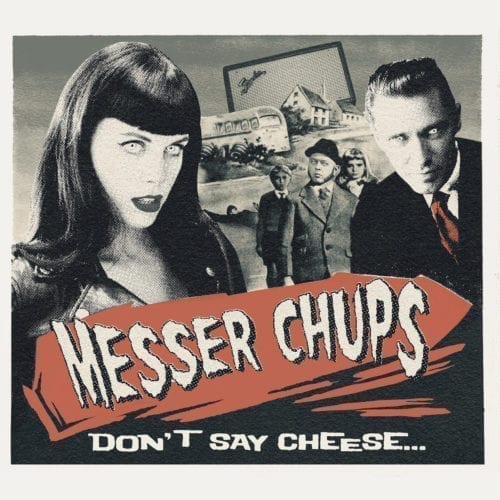 Russia’s leading contribution to the retro reverb revival of the last few decades is Messer Chups, which is tremolo tsar Oleg Gitaracula and his rhythm section, bassist Zombierella and drummer Rockin’ Eugene – a pair that are almost literal incarnations of The Rocky & Bullwinkle Show’s Boris and Natasha.

Their latest of many albums was released on the first of May, which would have been like the Fourth of July for these comrades from Saint Petersburg, were we still in the Cold War era. That’s the antiquated zeitgeist the trio wallow in, though it isn’t Soviet kitsch that turns their cranks, but rather all-American Atomic Age trash culture – particularly vintage horror movies.

Funny thing about Messer Chups is how much more conventional they’ve become over the 20 years they’ve been at it. Their early records were rife with snatches of B-movie dialogue, Halloween sound effects, and strange instrumentation. They were like the creature-feature complement to the kitsch retrofuturism of Man or Astro-man? in a drive-in double bill. Both bands treated the proverbial rock ’n’ roll garage as a science lab.

Don’t Say Cheese sticks tight to straightforward surf rock, tossing in in a bit of burlesque R&B grind (“Cadabra Box Pandora Strip”), and several curious covers. These include a variant on the prototypical synth-pop tune “Popcorn”, which they’ve covered before, and a surprisingly beautiful instrumental of Chris Isaak’s tearjerker “Wicked Game”. Two originals are reprised with vocals c/o Zombierella, whose spooky Slavic femme-fatale affectations are a definite plus.