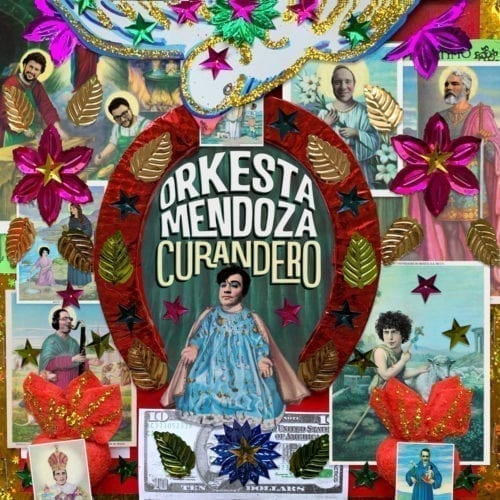 Founded in 2009, Arizona’s Orkesta Mendoza was initially an ephemeral effort, thrown together for a tribute to Cuba’s mambo maestro Pérez Prado. Well, here they are, a decade and three albums later, and they’re still having fun – and awful lot of it, if Curandero is any indication.

OM jefe Sergio Mendoza is also a member of Tucson’s Calexico, and the bands share a list of basic ingredients sourced on both sides of the border, as well as a somewhat cinematic sensibility. Beyond that, though, Calexico and Mendoza’s Orkesta are almost literally night and day – the former’s lonesome “desert noir” drenched in a somber midnight mood, the latter’s bilingual “Mexican mambo” sociable (guests abound on Curandero) and soaked in sunshine.

Opener “La Paleta”, a muscular, uptempo cumbia rocker, kicks the door open, and from there, like some lurid lotería card for your loudspeakers, Curandero proceeds to do something different at every turn. “Head Above Water” is a sparkling, buoyant bit of tropical ska, while “Eres Oficial” and “Why You Looking That Way” bounce around some bubblegum boogaloo. Elsewhere, there’s the sentimental, psychotropic dub-reggae ranchera of “Me dejo Llevar”, the 8-bit ornamentation of “El Chumina”, and the outlandish mambo “Bora Bora”. Things close out on the finger-snapping boogie-woogie of “Hoodoo Voodoo Queen”, sustaining the album’s irreverent high spirits to its final, full-bodied chord.