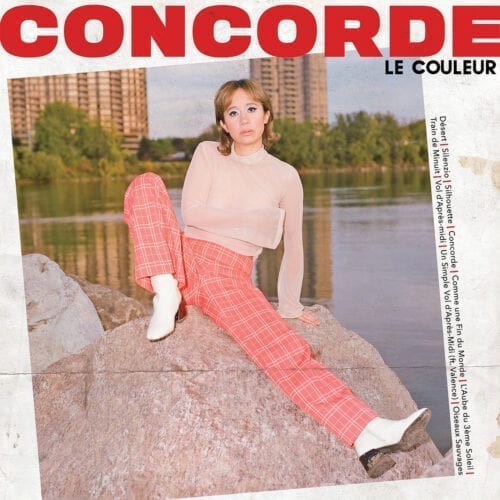 Death is the central theme of Montreal band Le Couleur’s third album, Concorde. Yet the trio approaches the inescapable finality in a fashion more fantastical than tragic. Death is, so to speak, a sense of urgency that keeps us alive. It is also the myth. Exploring beauty in fatality on synth-pop tunes and a carnal voice, that’s the artistic approach of singer Laurence Giroux-Do and her fellow musicians, Patrick Gosselin and Steeven Chouinard.

This death is clearly illustrated by the title song of the album, which evokes the crash of a  Air France Concorde in July 2000. The lyrics are eloquent: “body within your body / feel the heat / the weightlessness / infinite dreams / focus to better take flight / in full glory / a supersonic crossing of the Atlantic”. In fact, the lyrics of the 10 tracks are inspired by the story of this single historic Concorde crash, namely flight 4590 to New York. But nothing is really tragic on the Concorde album…

It’s always sensuality and danceability that prevail in the work of the group. They’ve moved away from the electro universe, though. It’s still sweet and catchy, but darker and more biting than the previous albums, P.O.P. (2016) and Origami (2010). The raging guitar at the end of the superb “Désert”, which opens the album, is proof of this desire to offer stronger and more exploratory passages than before. Same observation for “L’aube du 3ème soleil”, which pushes toward the less familiar. Just after, the lively “Train de minuit” is more digestible, a clever mix of pop and disco which makes us believe that Michael Jackson could have created a soundtrack with Abba…

Listening to Concorde‘s fine French-language proposal, one thing stands out: Le Couleur knows how to blend modern and vintage sounds. Several artists have tried it, but with less success. Energetic, catchy, seductive, the album may seem easy to access. But don’t be mistaken. The ambitious Concorde is a fine frenzy aimed first and foremost at people who love dapper and daring music. It’s pop chic with a lot of tailoring, elegant art that takes you further than the first stopover.